‘You’re almost in a third world country': Homeless people look for places to return cans after some businesses stop accepting them 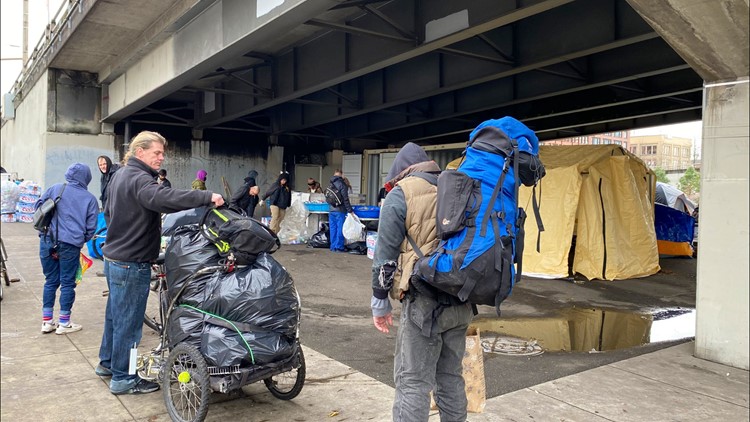 Refusing to accept returnables goes against Oregon law. Businesses could face daily fines up to $500.

PORTLAND, Ore. — The smell of smoke billowing out of warming fires at a nearby homeless camp filled the air under the Morrison Bridge Monday afternoon. Dozens of people, many of them homeless, lined up underneath the bridge with trash bags full of returnables.

“You’re almost in a third world country epidemic, you know what I mean,” said one homeless veteran waiting in line. “Canning is really vital to the community.”

Larry Smith, who collects cans and bottles for a living, pointed to a row of bagged cans he had lined up along the sidewalk. He said he was expecting to walk away with $300 to help pay for his hotel room, food, cigarettes and gas.

“I make more money an hour than most people do in pretty good jobs,” he said. “I go out and get the cans at night, usually about four or five hours it takes me to get these right here.”

For people like Smith, the People’s Depot under the Morrison Bridge has become the only reliable place to return bottles, because nearby stores in the Central Eastside district have recently begun to either limit bottle return services or stop accepting them altogether.

“I think they discriminate against people. Safeway and Fred Meyer, they shut down totally, they only give you $2.40. I used to take all my cans to Safeway,” said one man waiting in line.

“I don’t like dealing with the stores. It’s always hit and miss,” added another.

As of last week, Market of Choice off Southeast Belmont is one of the stores no longer accepting returnables. The assistant store manager told KGW homeless people returning bottles have assaulted their staff and they’ve had to call police numerous times.

Homeless people camp across the street waiting to drop off bottles every morning and they often become hostile during the process, the assistant manager said. Employees dread coming into work because of it.

But refusing to accept returnables goes against Oregon law. According to the Oregon Liquor and Cannabis Commission, businesses who violate the law could face daily fines up to $500. Those at Market of Choice are aware of the penalties and are trying to find a way to both comply and keep their staff safe.

“I don’t understand what the safety concerns are. We’ve been under here close to three years, and we’ve never had the cops come here we’ve never had any major fights break out,” said Chris Brown, who works at People’s Depot under the Morrison Bridge.

Brown was previously homeless until he got his current job.

“It’s helped a lot. I’ve managed to get my life back together again,” Brown said.

“Everyone is really respectful and respects what we do, we’ve become a pillar in the community,” Brown said.