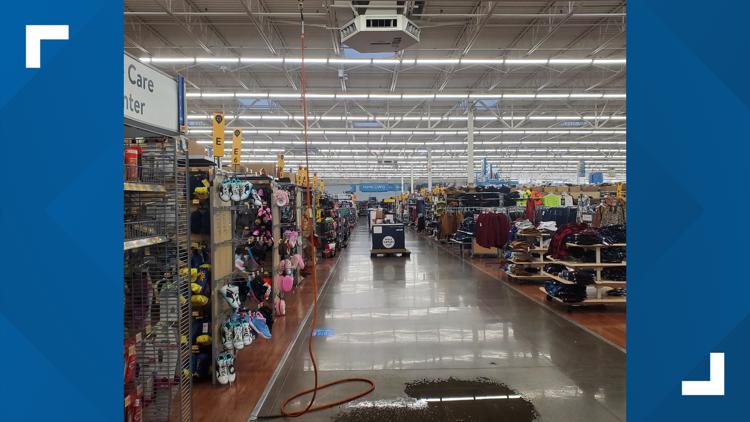 Like a scene from a movie, a thief dropped into the store and hit the jewelry counter. Police said the suspect got into the store by rappelling in from the roof.

WOODLAND, Wash. — Like a scene from a movie, a thief dropped into a store from the roof and hit the jewelry counter, stuffing loot into a backpack during an attempted jewelry heist at the Walmart in Woodland on Christmas day.

Police said that the suspect got into the store by rappelling in from above through a skylight.

Woodland police provided security video from early in the morning on Christmas day. The Walmart store was closed, but the suspect — who police believe is a man — decided to drop in anyway.

Photos of the aftermath are now evidence in the unsolved burglary case, including one of the skylights on the roof above, which the burglar breached.

“(They) ended up breaking the seal on one of the skylights and the security mesh and they repelled down into the building,” said Woodland Police Sgt. James Keller.

The suspect clipped a carabineer to an HVAC unit up top and dropped the other end of the rope right into the store. The rope was long enough to gather on the floor below. Once inside, the suspect made a beeline for the jewelry case and loaded up a backpack full of items worth about $5,100.

It’s a little like something out of a movie, but here in Woodland, Wash.

“And to go to the extent of repelling through a skylight for Walmart jewelry … I mean, I don’t think it’s ok (with) any kind of jewelry, but wow that’s extreme,” said Bernard.

It’s extreme, but also unusual, according to Sgt. Keller.

“That’s probably one of the first I’ve ever seen here in 16 years where they’ve gone to that extent, actually repelling into the facility. It’s probably a good 35-40 feet.”

Despite the resourceful break-in, there was one big problem for the would-be burglar. During the heist, an alarm system did finally go off. The noise sent him running, dropping his backpack full of stolen jewelry in the aisle before exiting the store.

The alarm got police officers to the Walmart too, but the suspect was gone when they arrived. The case remains an open investigation, and anyone with information is asked to contact the Woodland Police Department.