Why the owner of a fish cannery became the namesake of Warrendale, Oregon 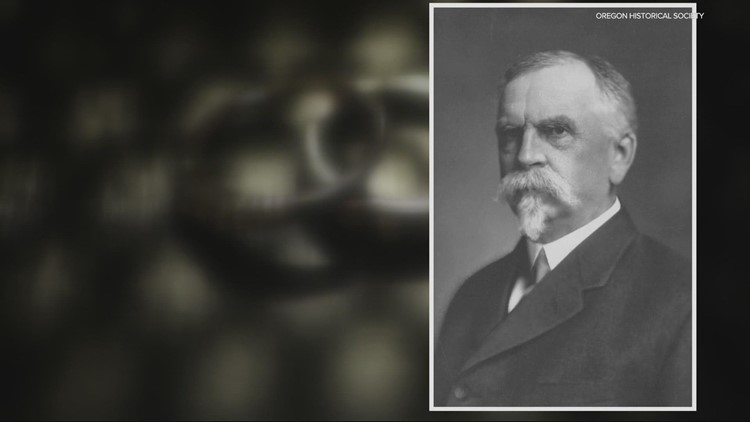 Frank Manley Warren made millions off canned fish, but he’s most remembered as a hero for helping rescue passengers aboard the sinking Titanic.

From the freeway, it’s an exit sign often passed up: number 37 for drivers heading westbound from Cascade Locks to Portland.

Warrendale is a quiet community just east of Multnomah County.

Dr. Frank Warren’s great-great grandfather, also named Frank Warren, is whom the community was named for.

“He was an entrepreneur. A business owner from Oregon,” Warren said.

Frank Manley Warren, born in 1848, was a very successful business man. He was working at a bank in Portland when he was sent to settle a dispute between competing fish canneries along the Columbia River.

Realizing how lucrative the fishing and canned salmon business was, in 1877 Frank Manley Warren “bought all the fish wheels along the Oregon side of the Cascades,” said Janice Crane, the executive director of the Friends of the Cascade Locks Historical Museum.

OTHER STORIES: How a blacksmith came to name Coburg, Oregon

At the time, dozens of fish wheels — large sternwheeler style wheels that acted like rotating fish nets — were scattered in the Columbia River catching salmon.

“These were pulling out 42 million pounds of fish at the peak of their usage,” Crane said.

Frank Manley Warren opened the Warren Packing Company, a cannery used to clean, can and ship the canned fish to be shipped out across the United States. The cannery was the largest in the area and it raked in money.

“It was a good investment at the time. There was growing demand for Columbia River salmon around the United States,” Crane said.

OTHER STORIES: Where the ‘X’ in PDX comes from

Besides being a businessman, Frank Manley Warren was also a husband and father to four children. He and his wife, Anna Warren, went on a vacation to Europe and Asia to celebrate their 40th wedding anniversary in 1912.

“Their whole goal was to go to Egypt,” Frank Warren said. “So obviously, that was a long journey. They took a train across the United States. They took a boat to Europe, then they traveled across Europe and they made it to Egypt.”

On their way back to the United States, they boarded a ship. It was the largest passenger ship built at the time and it was said to be unsinkable.

Their return trip was aboard the ill-fated Titanic, which left the Southampton, U.K port on April 10, 1912. Two days later, the ship would hit an iceberg and begin sinking.

OTHER STORIES: KGW Vault: Oregon’s connections to the Titanic tragedy

Newspaper reports from days later described Frank Manley Warren as a hero who helped other passengers get on board several rescue boats that were lowered from the Titanic.

His wife recounted the following to one newspaper:

“We were both fully dressed when the crash occurred and were soon ordered to take to the boats. My husband helped me in. Then turned to aid some other women who were standing nearby. Before I realized what was happening, the boat was full and the sailors lowered it away. The last I saw of Frank he was standing by the rail and waving to me and calling that he would be along on the next boat. I never saw him again.”

Frank Manley Warren was among the more than 1500 that died when the Titanic sunk and he was the only Oregonian.

“There’s a potential that they were not supposed to be on the Titanic, but they were,” Frank Warren said, referring to a 1912 coal strike that may have shut down other ships and made it so the Titanic was one of the only options available to cross the Atlantic.

In 1928, fish wheels would be banned in Oregon and in the coming years, the Warren Packing Company’s cannery closed down.

Visitors can still see some of the pilings that once held the very lucrative business of the Warrendale Packing Company along the Columbia River Shoreline, near the community of Warrendale.

WATCH: What’s in a Name? playlist