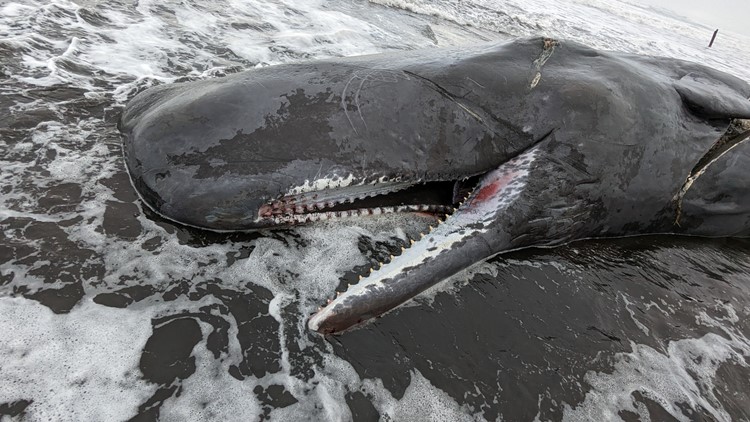 The sperm whale carcass may be left to decompose at the beach or it may be moved to a less public area, according to experts with the Seaside Aquarium.

The U.S. Coast Guard Pacific Northwest District received multiple reports of a beached whale in the surf on Saturday and contacted the National Oceanic and Atmospheric Administration (NOAA), which took the lead in responding.

Where was the beached whale found?

Michael Milstein with NOAA confirmed that the whale is dead and somewhat decomposed. It is located south of the Wreck of the Peter Iredale in Fort Stevens State Park.

What type of whale is it?

It was first reported as a humpback whale, which is common seeing as about a half dozen humpbacks wash up on the Oregon coast each year. Marine experts later determined it was a 40-foot-long male sperm whale.

“You can tell by its large jaw,” said Tiffany Boothe, the assistant manager at Seaside Aquarium. “They have this really big mouth lined with a bunch of teeth; it has a very distinct look.”

Milstein confirmed it was a sperm whale. Sperm whales are less common off Oregon and Washington in the winter, Milstein said, so the washup is unusual.

Due to the current high tides, NOAA said it probably wouldn’t be able to examine the body of the whale until Monday.

The whale carcass may be left to decompose at the beach, or it may be moved to a less public area, according to Boothe with the Seaside Aquarium. If it’s moved, Oregon State Parks would be in charge of the transfer, Boothe said.

A necropsy is planned for later in the week to find out why the whale died. They will be focusing on a large propeller-like gash in its side.

The aquarium is part of the Marine Mammal Stranding Network, which responds to animals dead or alive along the Oregon coast and then report their findings to Portland State University, Boothe said.

On Sunday morning, they removed the whale’s lower jaw and teeth.

“A lot of scientific value can come out of the lower jaw,” Boothe said. “Unfortunately, there are people out there who will come and carve the teeth out, so it’s really important for us to get that whole jaw off as soon as we can.”

What to know if you’re going to see the whale

Marine experts encourage people to look but from afar.

“We ask people not to touch marine mammals,” Boothe said. “They can carry diseases that can be transmitted to humans and pets, so it’s just a good idea, especially since we don’t know exactly what happened to the whale, to keep your distance.”