What is an ice storm, and when was the last one Oregon experienced? 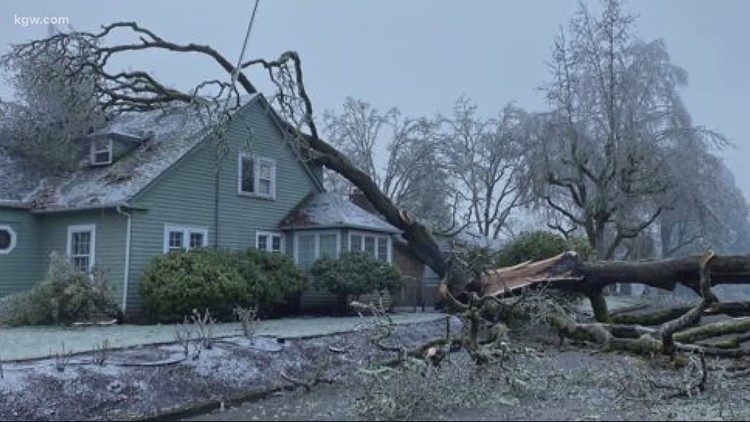 The last ice storm to hit the Portland area was a bad one, knocking out power for tens of thousands over several days. We don’t know yet how this one will compare.

PORTLAND, Ore. — With an ice storm expected to arrive on Thursday of this week — just in time for Christmas holiday travel — many Oregonians and Washingtonians may be reminded of our region’s last big ice storm, which hit over the Valentine’s Day weekend of 2021.

An ice storm, simply put, is one where there’s an accumulation of ice on the ground and other surfaces rather than snow, often deposited by sleet or freezing rain. By the National Oceanic and Atmospheric Administration’s definition, hazardous ice accumulations are usually a quarter-inch or greater.

Although we know the ingredients are present for sleet and freezing rain, there’s no indication that this week’s ice storm will rival that of February 2021. However, it’s not a bad idea to be prepared for the possibility of extended power outages and impacts on travel — especially heading into the Christmas holiday weekend.

So, what are the ingredients we’re talking about? Well, cold and precipitation are two important ingredients — but if that was it, we’d just be getting snow. KGW chief meteorologist Matt Zaffino walked us through the reasons why freezing rain or sleet are in the forecast, specifically.

“All of our precipitation will begin as snow, very high up in the clouds, even in the summertime — but then it hits the warm layer, it melts and it’s just rain,” said Zaffino. “That’s the normal situation. The freezing level can vary, and that’s why we get snow down to 1,000 feet, sometimes it’s 4,000 feet. But for the most part, that’s what happens.”

What we expect to see this week is more complicated. Temperatures near the ground will be below freezing, somewhere in the 20s. But there will be a wedge of warmer air, what Zaffino called an “overriding situation,” overhead. The warm air causes the snow to melt as it falls, creating rain. But then it hits the cold air below.

In this situation, precipitation can either become sleet or freezing rain. With the former, the layer of warm air is thin enough and the ground-level cold air thick enough that the rain can then re-freeze in midair, falling to the ground as ice pellets — sleet. With the latter, the warm air layer is thick enough that rain falls until it hits the ground, where it freezes. This is what we call freezing rain.

The reason why this is happening, Zaffino explained, is that a huge mass of cold Arctic air is descending into the midwestern U.S. this week. While Oregon is actually on the far western edge of this mass, that cold air will touch eastern Oregon and Washington — and the Gorge will funnel the air west, into the greater Portland area.

By the time the cold air gets to Portland, Zaffino said, it’s very shallow over the ground. At the same time, there’s a warmer weather system moving in from off the Oregon coast — situated higher in the atmosphere and bringing with it plenty of precipitation.

While things won’t be pleasant in the Portland area, the Columbia River Gorge will arguably be seeing considerably worse conditions, according to Zaffino: between 4 and 6 inches of snow, blizzard conditions, then ice, “bitter cold” and dangerously high winds.

This dynamic is expected to keep up through Thursday evening, producing ice accumulation throughout our region. It will continue more or less through Friday evening as well. It isn’t until Saturday that the forecast shows things warming up enough to stop the accumulation of ice.

Back on that weekend in February 2021, the National Weather Service had just said that Portland tied a record for single-day snowfall for the month of February. However, it was the freezing rain and ice that followed that really had an impact.

Around an inch of ice accumulated in the central Willamette Valley. Some areas, like around Oregon City, got up to an inch and a half of ice. The weight of the ice brought down countless trees, branches and limbs — many of them carrying power lines down with them or smashing into homes.

“At that point the trees were already starting to snap, so everyone that I spoke to — no one slept all night long, because it was just like firecrackers going off constantly and all the transformers that were blowing up … it was like fireworks,” a woman named Cindy told us at the time.

In some areas, like Woodburn, downed power lines effectively trapped people in their neighborhoods.

At the storm’s peak that weekend, a quarter of a million Portland General Electric customers were without power. Tens of thousands of people were in the dark, without heat, for several days before crews managed to get the power back on. Some were without power for well over a week, and Gov. Kate Brown declared a state of emergency for much of northwestern Oregon.

Cleanup efforts took weeks, if not months, to account for all of the tree debris. Arborists were overwhelmed with calls, and counties around the Portland metro had their hands full collecting trees and branches, then sending them through the wood chipper.