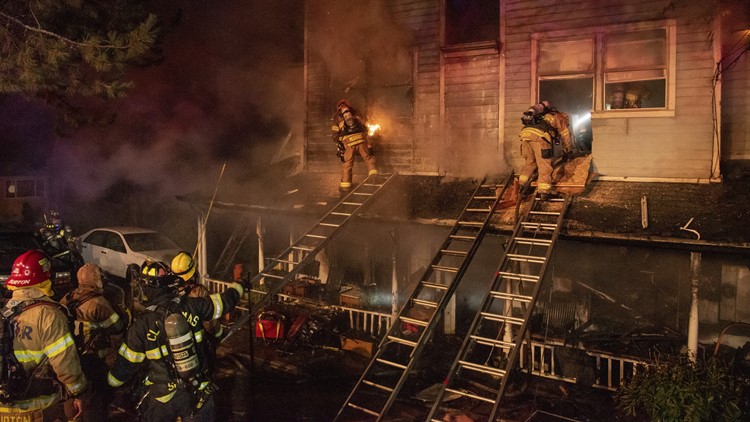 Fire officials said that the fire was likely caused by a lit candle being used for light during a power outage.

WEST LINN, Ore. — An expansive old home in West Linn that had been converted into apartments caught fire Tuesday afternoon, severely damaging the building and making it uninhabitable for the residents.

According to Tualatin Valley Fire & Rescue, firefighters were called to the 2300 block of Fifth Avenue in West Linn just after 4:30 p.m. for reports that a large, multi-story home had caught fire. The initial calls indicated that there was a fire inside one of the bedrooms.

Fire crews arrived on the scene to find the building, which was split into five different apartments, emanating heavy smoke and flames. The fire was upgraded to a second alarm, bringing in more crews, engines and trucks.

TVF&R said that firefighters began attacking the fire and conducted a floor-by-floor search for anyone still inside. Crews found two people within and helped get them out.

Initially, both people declined to go to the hospital, TVF&R said. They later changed their minds and were taken in an ambulance.

Meanwhile, the fire continued to spread. TVF&R said that the home’s century-old style allowed for flames to spread more rapidly and proved a challenge for fire crews. Firefighters tracked the fire’s progress and used thermal imaging cameras to find hotspots. They got it under control in an hour and a half, TVF&R said.

When all was said in done, the building was too damaged for anyone to keep living inside. Nine residents were displaced in total, and the Red Cross was activated to help them find shelter. A pet cat was also found dead inside the home.

The fire investigator learned from initial reports that the fire started with an unattended lit candle that was being used during a power outage.

“Candles are a fire hazard, and TVF&R suggests using only flashlights, battery-operated lanterns, and light sticks as emergency lighting in your home,” the agency said.