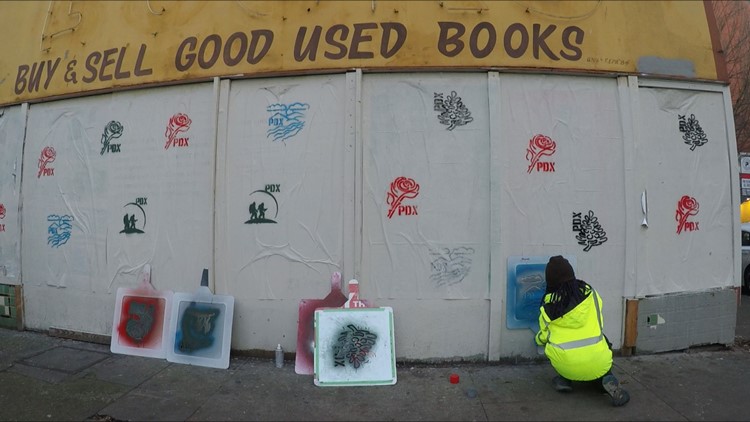 Paul Watts with Graffiti Removal Services said he doesn’t consider the stenciled designs to be tags —but rather a way to abate graffiti in the city.

PORTLAND, Ore. — You don’t have to go far in Portland to find buildings, walls, and signs covered in graffiti. It’s certainly nothing new — but state and local leaders have poured money into the cleanup efforts earlier this year, hoping to lessen the problem.

Now a local crew — Graffiti Removal Services — contracted by the city, is fighting back in an interesting way: putting up what is, essentially, preventative graffiti.

“I wouldn’t really call it tagging buildings,” said Paul Watts, owner of Graffiti Removal Services. “We are cleaning them up, and usually the property owner knows that we are doing it. We are putting something up there that sparks a little bit of conversation.”

“We have the PDX rose. We have the two Sasquatch’s holding a salmon and walking over the hillside. Just something fun.”

The unique, stenciled designs aren’t just a conversation starter. Watts explained they’ve proven to be an effective tactic to ward off vandals.

“You know I’ve been in business in Portland here about nine or 10 years, and really like murals in town, if you put a mural up, they have a little bit of a code of ethics that they will not hurt the mural they don’t tag murals,” he said.

“A lot of the plywood and the buildings that are boarded up — they kind of invite graffiti a little bit. We are going around and painting the plywood a couple of different colors, painting over the graffiti, and then, adding kind of a holiday touch to it with a couple of stencils that hopefully detract the graffiti.”

Watts’ team responds to clean up calls across town, though the focus recently has been downtown and the Central Eastside.

“Everywhere in the city will see us out there eventually,” Watts said, “The crew and I kind of dub this the Rose City Rebound plan.”

The rebound plan also has a proactive component.

“I have people out there, walking the city daily, going out there and finding the graffiti, reporting it back to us, and then we go out and remove it and clean it before anybody calls.”

Of course, Portlanders can still call and report graffiti they’d like to be removed. On the city’s website, you can fill out an application — and if the graffiti removal falls within the scope of what workers cover, they will go out and take care of the problem.