‘We’re all just stuck out here:’ Homeless camps cleared from Central Eastside, some not offered services in return 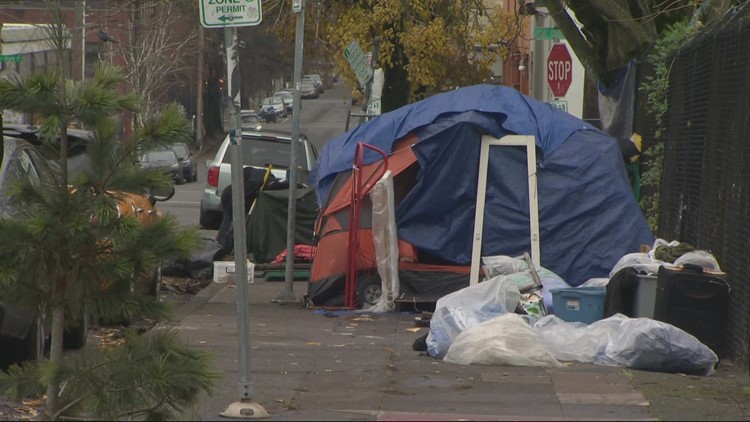 The city is ramping up campsite removals in the Central Eastside in response to the mayor’s 90-day reset plan.

PORTLAND, Ore. — A homeless man stokes a small fire outside of his tent Sunday morning on the corner of Southeast 6th Avenue and Oak Street. He’s only been sleeping there for a short time after Portland’s Rapid Response teams cleared his site twice in one day.

“It kind of sucks. It’s kind of depressing as hell when you got like nowhere to go,” Kyle said while fighting to stay warm by his fire.

The city is ramping up campsite removals in the Central Eastside in response to the mayor’s 90-day reset plan that recently launched. The plan is meant to clean up the neighborhood and increase police patrols. It’s in response to dozens of business owners calling on the mayor for help about two weeks ago citing safety concerns.

“One of our employees on his way into our central kitchen was held at gun point,” Kim Malek explained to mayor Wheeler at a community meeting last month.

“Like everyone in this room we deal daily with human feces on our shoes, we deal with break ins and we deal with assaults,” added Darren Marshall the CEO of Smith Teamaker.

He’s considering moving his headquarters out of Portland. At that meeting, mayor Wheeler promised them results by launching a 90-day reset plan in the Central Eastside.

“Not just in terms of the data but I want it to pass the see test if you don’t see it, it doesn’t matter so my expectation is that you will,” Wheeler said.

Another one of his reset plans launched last March in Old Town, which saw temporary results and got 87 people into shelters.

Across the river, Kyle’s camp is getting the brunt of this plan. He was swept twice this weekend and has until 8 a.m. Monday to move again.

KGW asked Kyle if city crews offered him any housing or shelter services after they cleared his site. He responded by saying they didn’t offer any services or refer him to a shelter but gave him five dollars.

According to city data, last week they assessed 500 camps and removed 50 of them. They only offered shelter referrals to 42 people, 33 accepted and 28 actually spent the night in the shelter. Going off of this data and from talking with those on the streets, KGW found not everyone is being offered a safe place to go.

“I just think that they look down upon people who are poor,” said Alex who shares a campsite on the corner of Southeast Grand Ave and Oak Street with his friend Zach. They’ve tasked themselves with watching out for the neighborhood and said they’ve stopped people from breaking into nearby businesses.

“I just try to make a bigger conscious effort to keep my area clean and my surrounding area and my street clean,” said Zach.

He sees the mayor’s reset plan as a ticking time bomb; leaving him in fear of his site being removed, one he spent $500 making.

“So, after we get cleared what are we supposed to do after that happens,” he said. “I have a job. I work at Plaid Pantry. I work graveyard at Plaid Pantry five days a week it’s still not enough to pay for something. I can either have clothes and food in my gut and live out here or I can go live somewhere and have a roof over my head and have no clothes and no food in my gut. I can’t afford to have both.”
Another meeting on this 90-day reset plan is scheduled for Tuesday and this one is not open to the public. KGW reached out to the city to see how many camps they’ve removed from the central eastside. They said they will provide that information on Monday.