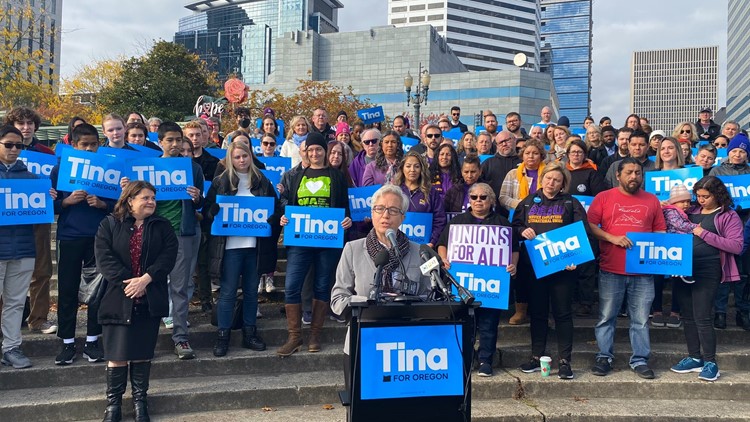 Once in office, Kotek plans to focus on three things: the homeless crisis, expanding access to mental health and addiction treatment and unifying the state.

PORTLAND, Ore. — Tina Kotek, expected to be Oregon’s next governor, addressed a crowd of supporters Thursday morning at the Salmon Street Springs in downtown Portland. She was met with long-awaited cheers from dozens of supporters as she declared victory in the race for Oregon governor. Among the crowd were many high schools students, some of whom were too young to vote.

What was an incredibly close race is now in the history book as Kotek is Oregon’s first openly lesbian governor.

“I’m excited to stand before you today as the governor elect of the great state of Oregon,” Kotek said at the Thursday press conference. “The campaign has been a tremendous journey I’ve heard from Oregonians across our beautiful state— that they want things to be better, they want problems solved and they want to be included in the solutions to our toughest challenges.”

The timing of her speech was considered controversial to some of the Oregonians still holding out hope for her Republican challenger, Christine Drazan.

Drazan has not conceded and in a statement early Thursday afternoon said: “With several hundred thousand ballots yet to be counted, we continue to exercise patience as we await additional clarity regarding the final outcome of this race. Oregonians should have confidence that their votes will be counted as our county clerks continue their diligent work.”

The Oregonian projected Kotek would win the race on Wednesday morning. By Thursday afternoon, The Associated Press joined by declaring her the winner. The latest numbers released around 6 p.m. Thursday afternoon showed Kotek leading Drazan by about 68,000 votes.

“I did speak with leader Drazan this morning, she understands that that’s where that analysis is and it’s time to start work … There’s an urgency from voters and we are moving forward,” Kotek said.

Once in office, Kotek said she plans to focus on three things: the homeless crisis, expanding access to mental health and addiction treatment and unifying the state.

.@TinaKotek waves to her fans at the Portland waterfront. pic.twitter.com/BMYgOawYuH

“I promise to be a governor for all of Oregon…I ask my fellow Oregonians no matter who you voted for or even whether you voted at all to believe in our state and out future so we can all solve problems together,” Kotek said.

Among the crowd was a group of high school students with a group called Teens for Tina.

“We know that Gen Z is going to be one of the largest voting blocs coming up here in the next few years,” said teen Oscar Ponteri with the group. “So having people get involved early is really going to be key to making sure our priorities get addressed.”

The priorities they referred to: reproductive rights, climate change and gun control.

“I’m really concerned with my personal freedom as a woman,” said one girl.

Another teen named Aidan Pace added, “I also grew up with two lesbian moms so having that representation in office is really important to me.”

Hearing from young Oregonians like these was a focus for Kotek throughout her entire campaign.

“She was willing to listen to the voices of people like ourselves like young people even though we’re not all of us aren’t old enough to vote we still have priorities, we still have issues that we really care about,” said high school student Jeffrey Teh.

Kotek also announced her former chief of staff will lead her team as they transition into the governor’s office.  She plans to travel to the communities that mainly voted for republican Christine Drazan at the start of the new year.