Timeline: Chance of snow in the Willamette Valley this week 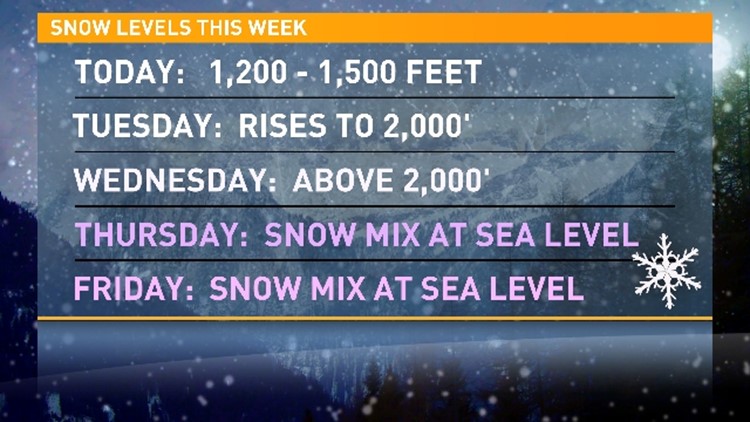 Snow levels will hold around sea level starting Thursday, bringing the chance for a dusting of snow in lower elevations of the Willamette Valley including Portland.

PORTLAND, Ore. — People in downtown Portland and other lower elevations of the Willamette Valley could see a dusting of snow on the ground later this week.

A cold weather system is moving through the Pacific Northwest, making for a chilly final week of November. High temperatures in Portland are set to average 5-8 degrees below normal.

Here’s a look at what to expect as lowering sea levels bring a chance of valley snow.

Snow levels in the Willamette Valley

Snow levels will hold above 1,000 feet Monday and will rise to 2,000 feet and higher on Tuesday, as the next round of precipitation arrives with a warm front.

On Wednesday, the Willamette Valley will see heavy rain at times while the mountains are expected to see 1-2 feet of snow above 2,000 feet.

The coldest air will arrive Wednesday afternoon and into Thursday. That means snow levels will potentially lower to sea level by Thursday morning, according to Hill. That brings the potential for a dusting of snow in the lower elevations of the Willamette Valley including around downtown Portland.

Snow levels will remain at sea level on Friday.

Hill said if the valley does see a dusting of snow, high temperatures are expected to reach at least 40 degrees, so any dusting of snow on the ground would melt during the day.