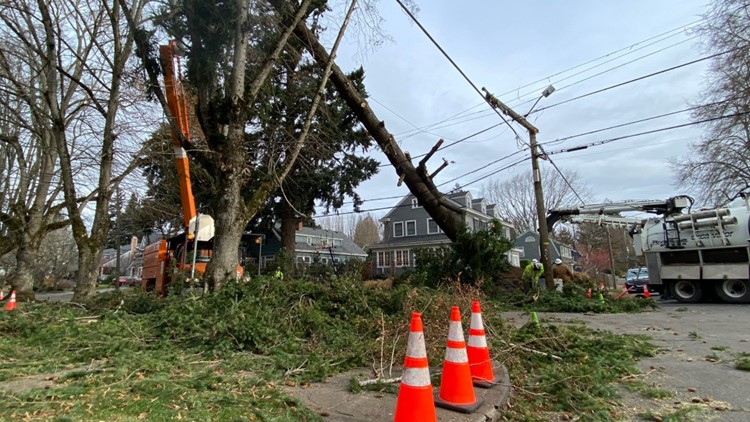 Thousands in the Portland-Vancouver metro area and thousands more on the Oregon Coast are without power Friday morning.

PORTLAND, Ore. — Thousands of people in the Portland metro area are without power Friday morning as the region deals with the impacts of an ice storm that arrived Thursday night.

Even before the snow, sleet and freezing rain arrived, thousands had lost power Thursday morning as strong winds moved into Oregon.

As of about noon Friday, Portland General Electric (PGE), one of the state’s major electric utility companies, reported fewer than 7,000 power outages on its outage map, with the outages centralized in the Portland-Vancouver metro area. At its peak, on Thurday, there were about 14,000 PGE customers without power.

Farmer said about 375 employees were working Thursday to restore power. PGE reported that more than 400 crew members were working on power restoration Friday.

“Our crews continue to work as quickly as safety allows,” Farmer said. “We’re going to continue to keep working through the day.”

More than 4,500 Pacific Power customers were also dealing with power outages Friday morning, though most were outside of the Portland metro area. About 600 of those customers without power were on the Oregon Coast, north of Lincoln City. The other 3,600 were in and around the Astoria area on the northern Oregon Coast.

RELATED: How to contact your power company in the case of an outage

On Thursday, a tree fell on top of lines in Northeast Portland’s Irvington neighborhood, knocking out power for several hours in the area. The power lines stopped the tree from falling on the house below, and neighbors weren’t home at the time.

This is in the Irvington neighborhood in NE Portland. Pacific Power crews are working on it now. Some neighbors lost power here for a few hours this morning. @KGWNews pic.twitter.com/zhEDtGdyci

Miles Ogden, a 12-year-old boy who lives across the street, said he watched the tree fall from his bedroom window early Thursday morning. “I woke up when I hear a giant boom,” Ogden said. “It looked like lightning, all the sparks.”

Ogden said he was grateful that power lines stopped the tall fir tree from falling on his neighbors’ home. Crews cut the tree in half Thursday, leaving half the trunk leaning at an angle and an uprooted sidewalk for later repairs.

Another neighbor, John Ashworth, said he lost power for a few hours Thursday morning and he expects more power outages in the next two days.

“I’m kind of dreading (Thursday night) because the ice storm hasn’t hit yet and that’s what really takes the power out around here, so I’m going to heat the house up and hope for the best,” Ashworth said. “I think a bunch of people are going to be hit pretty hard.”

Meanwhile, in southwest Portland near Jesuit High School, a tree in Cory Knapp’s front yard fell and knocked out power in the neighborhood Thursday morning.

After restoration, Knapp’s tree snapped for a second time, creating another tangle of limbs and power lines. He joked about his unenviable position among neighbors of having his tree starting an outage.

“I’m feeling pretty special right now, feeling all the love around the neighborhood,” Knapp said with a smile, while he and neighbors stood in the street and diagnosed the problem.

A KGW photojournalist tweeted a video showing a powerline down on Highway 30 near the St. Johns Bridge in North Portland just before 8 a.m.

In Southeast Portland, a person was pinned in their chair by a tree that fell onto their home Thursday afternoon due to the weather, Portland Fire & Rescue said. The tree blocked the front door of a home, but crews got inside through a back door. Crews were able to free the resident who was pinned in their chair. They had minor injuries, according to Portland Fire & Rescue.

Downed power lines and trees were also causing some road closures in the Portland metro area earlier on Thursday. Southwest Walker Road was closed between Southwest Canyon Road and Southeast 103rd Avenue due to at least three broken power lines.

Here are some tips from utility companies on staying safe around downed lines: