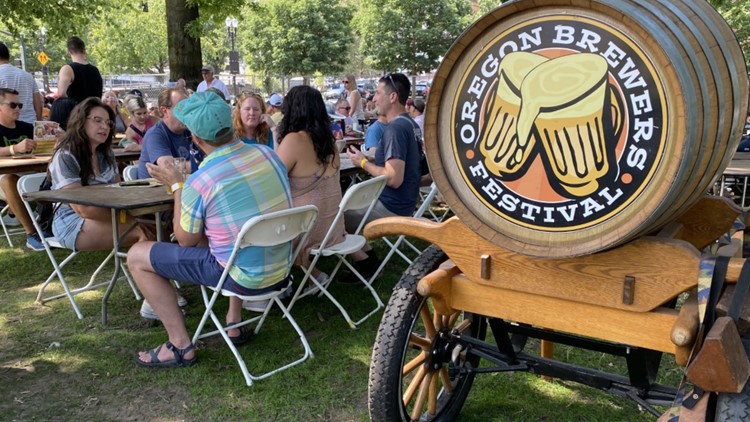 Organizers cited higher costs, lower attendance and extreme weather as some of the factors behind their decision to cancel in 2023.

PORTLAND, Ore. — This year’s Oregon Brewers Festival is canceled after organizers announced Friday afternoon they don’t have the factors together to put together a “successful event.”

The festival is a more than a 30-year-old summer tradition in Portland. Brewers from around Oregon produce beers for thousands of attendees at Tom McCall Waterfront Park.

In an announcement Friday, organizers cited higher costs, lower attendance and extreme weather as some of the factors for their decision to cancel, but added that those were just some of the challenges.

“After three decades of producing OBF, we’ve developed a solid understanding of what it takes to give our attendees a great festival,” organizers said in a statement. “It’s clear when those factors aren’t coming together for a successful event.”

Last year was the first time the event was held since the start of the pandemic in 2020. Unfortunately, the festival’s return landed on a week that brought a heat wave to the region with temperatures around 100 degrees.

Organizers said the festival will return “when the time is right.” In the meantime, they plan to look at supporting Oregon breweries and cideries through smaller festivals and partnerships.

The festival is one of the longest running beer craft beer festivals in the U.S., according to organizers. It was scheduled to take place at Tom McCall Waterfront Park from July 27 to 29.

“It’s kind of a big hit, it’s history,” said Chris Rhodes, who owns Nano Beer Fest which runs through Saturday in Southeast Portland. “Just talking to other festival owners, when it comes to downtown Portland, it’s really a struggle.”

Besides the Oregon Brewers Festival, Portland’s Holiday Ale Festival canceled its event in December for the third year in a row. Organizers posted that they plan to bring it back, in December, 2023.

Feast Portland, the city’s largest food festival announced in December it would not be returning in 2023, or ever. Organizers told Portland Monthly that so many restaurants are still in survival mode, facing supply chain issues and staffing shortages.

“Brewing is incredibly competitive now,” said Vestal. “When we started our business in 2010, there were 2,000 breweries in the entire country. There are almost 10,000 now so there’s good beer everywhere.”