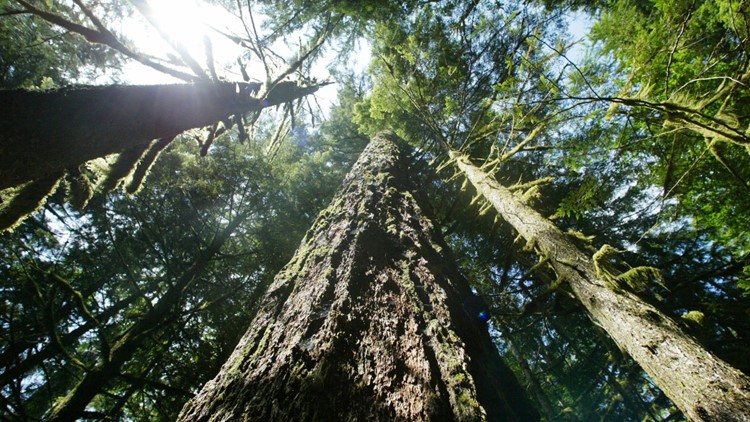 Using data from the Oregon Health Authority and the nonprofit Friends of Trees, a new study shows the lifesaving benefits of our arboreous neighbors.

PORTLAND, Ore. — The benefits of trees have been widely known for years.

Our arboreous neighbors provide cooling during hot summer days. They cut down on air pollution and increase property values. They’ve been shown to have traffic calming effects and they also just look great.

But could they be saving lives? Geoffrey Donovan, a researcher with the U.S. Forest Service, says the answer is likely yes.

He first became interested in the relationship between trees and death rates years ago after he did a study showing that more people died in neighborhoods with fewer trees.

“What I wondered was, is the opposite true?” he said. “That is, if we planted more trees, would we see fewer people die?”

To answer that, Donovan gathered mortality data from the Oregon Health Authority and tree data from the Portland-based nonprofit Friends of Trees, which has planted roughly 50,000 trees in the city since 1990.

He then used what he called “tedious statistical modeling” to look for trends in the data.

The findings of Donovan’s study, published in the Environment International journal earlier this year, were striking.

“In total, we estimate that trees planted by Friends of Trees are associated with about 15 fewer deaths per year in Portland,” he said.

Donovan was quick to acknowledge that, while his research showed a strong correlation between the number of trees in a neighborhood and a lower rate of morbidity, it did not prove a causal relationship between the two.

Still, given the efforts he put into accounting for other factors, Donovan said he was confident in his findings.

“We did not find that more trees cause fewer deaths, but we do think it’s likely that trees are saving lives in Portland because we accounted for a lot of other explanations,” he said.

While Portland has seen an expansion of its tree canopy over the last 20 years, that trend reversed more recently with the city losing more than 800 acres of tree cover between 2015 and 2020.

“That’s losing the equivalent of Mount Tabor Park — that sized chunk of tree canopy — every year for five years,” Jeff Ramsey, a science and policy specialist with Portland Parks and Recreation, said earlier this year.

Soon after that report was released, the city ended its biggest contract with Friends of Trees and shifted much of the street tree planting responsibility to the Bureau of Environmental Services and Portland Parks & Recreation. City representatives said the move was a “realignment” to streamline the tree planting process and that just as many trees, if not more, would continue to be planted along Portland’s streets moving forward.

Donovan said his research would not have been possible without the meticulous data collected by Friends of Trees, who recorded the location, species and planting date for every tree they planted dating back to 1990. City tree planting data only went back five or six years, according to Donovan.

He acknowledged some limitations to his research as well. He only had neighborhood level mortality data and he was only able to determine when trees were planted, not whether they survived or for how long.

His biggest takeaway, though, was how something so easy and relatively cheap can have such profoundly positive effects.

“We estimate the benefit-cost ratio was over a thousand-to-one, which is preposterous,” he said. “That’s the type of thing you only get in email scams or something like that.”