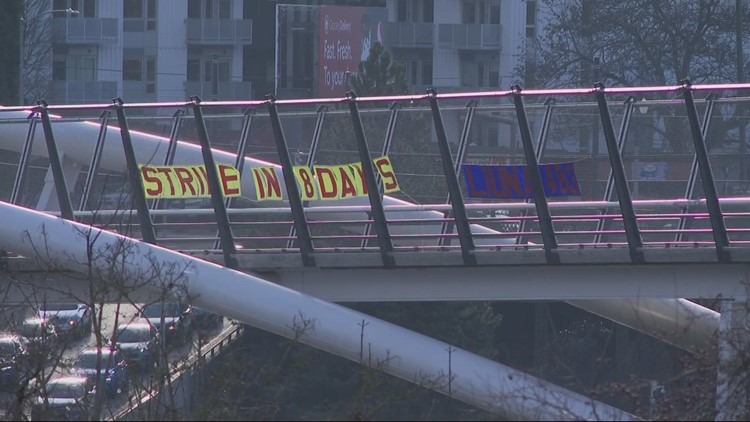 More than 600 city sewer, roads, parks and other workers could go on strike as early as Feb. 2 as lengthy negotiations have failed to produce a new contract.

PORTLAND, Ore. — Hundreds of employees with the City of Portland are preparing to go on strike as early as next week, after months of contract negotiations between the city and union representatives failed to produce an agreement.

Laborers International Union of North America Local 483 said it delivered a notice of the intent to strike to the city on Monday. The notice applies to more than 600 city employees under the “Portland City Laborers” contract.

Notices of an intent to strike require 10 days before a strike can begin, so laborers could halt work beginning Thursday, Feb. 2,  if no agreement is reached before then.

“They are the workers who showed up, in person, throughout the pandemic to keep our City running,” the union said in a statement. “They delayed negotiating a new contract for a year to accommodate the City of Portland in its time of need. In response, City decision makers have treated their safety and financial security as a low priority.”

Negotiations between union representatives and the city have gone on for more than 300 days without reaching an agreement, the union said — about 10 months.

The City of Portland said in a Tuesday statement that it is preparing for the possibility of a strike.

“PCL employees have the legal right to strike, and the City will not retaliate against any PCL employees who choose to go on strike,” the statement said. “Citywide planning efforts are underway to coordinate continued city services should a strike occur. “

According to city officials, Portland’s latest offer is a four-year agreement of over $39 million, including a minimum 12% increase to the base wages for all PCL-represented workers by July 1. About 60% of those workers would also receive “additional market-wage pay increases.”

Portland City Laborers have planned a gathering in Terry Schrunk Plaza outside City Hall on Saturday between noon and 3 p.m. to publicly demand that the city meet their needs.

“We view this contract as an opportunity for the City to honor the sacrifices of workers who have shown up through recent years of crisis,” the union said. “Additionally, money spent on the PCL contract is a sound financial investment. It resources necessary work that provides real value for the people of Portland. Without that investment, it is likely that the City will see substantial costs associated with the inability to recruit and retain the people needed to avoid catastrophic failures.”

The union’s statement did not mention specific sticking points that have dragged out the negotiations thus far.