The OSB Legal Publication Torts was last revised in 2012. A new revision is in the early planning stages, but in the meantime the Legal Publications team has provided statutory updates using the new Public Notes feature that is part of the new BarBooks™ online library platform.

This post highlights two areas related to automobile insurance. To view the complete list of notes updating these and other chapters of Torts, visit the BarBooks online library.

ORS 742.544 was amended in 2019. Where previously there was a formula that practitioners used to determine what percentage of a plaintiff’s recovery was paid to the personal injury protection (“PIP”) provider for benefits provided, the amendments now provide that a PIP provider: 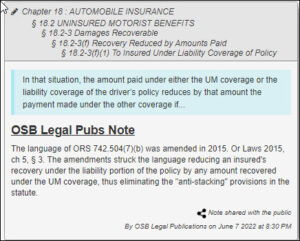 A significant change in 2015 to torts law was made to ORS 742.504, the statute addressing uninsured motorist coverage. Prior to the changes, any recovery against an insured’s own underinsured motorist protection (“UIM”) policy would be reduced by any amount recovered against a tortfeasor’s liability policy. That version of ORS 742.504 explicitly prohibited “stacking,” or compounding the two policies.

As an example, P was injured in a motor vehicle collision and incurred $175,000 in damages. The collision was deemed to be the fault of T, who carries $50,000 in liability coverage/person. P brings a claim against T’s liability policy, which tenders their $50,000/person limits. Because P’s damages exceed $50,000, P then brings a claim against P’s own UIM policy, which has a $100,000 limit. P’s insurer tenders their UIM limits BUT, because P already received $50,000 from T’s liability policy, P’s UIM carrier was entitled to offset the amount owed under the UIM policy by the $50,000 recovered against D, reducing P’s recovery against their UIM carrier to $50,000. P’s total recovery in this scenario would be $100,000.

The amendments in 2015 were to allow stacking of the policies. Now, in the example provided above, P would be able to recover the entire liability policy and the entire UIM policy, resulting in a $150,000 recovery for P.

How to Find More Updates

If you are an active member of the Oregon State Bar, you can find the Public Notes updates on the BarBooks™ online library by logging into the OSB website and then click on BarBooks in the navigation bar.

If you are not a member of the OSB, check out options for purchasing a subscription to BarBooks on the Legal Publications page.