‘Smells like rotten eggs:’ 40-foot-long whale washes up on the Oregon coast 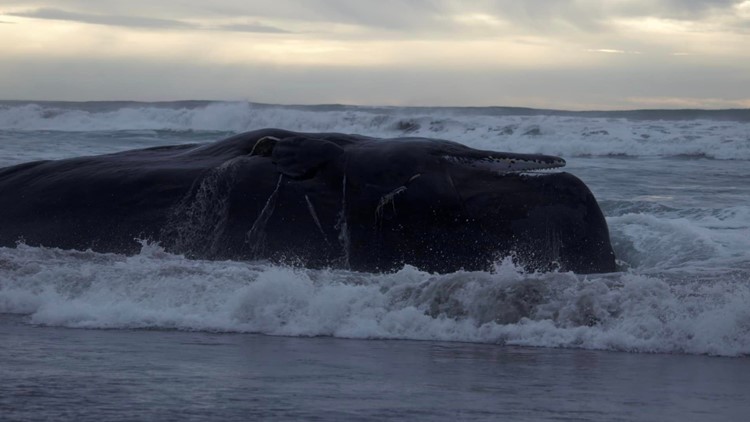 A dead sperm whale washed up onto the beach right next to the Peter Iredale Shipwreck along the northern coast of Oregon.

People of all ages marveled at the predator turned spectacle on the sand.

“I think it’s really cool and that it smells really bad,” said one girl.

“It’s an amazing part of nature is what it is,” another man said.

“I just think they’re such amazing animals living out there I don’t know how they do it its wild,” added a woman while taking photos of the animal.

Over the weekend it washed up onto the beach right next to the Peter Iredale Shipwreck. It was first reported as a humpback whale, which is common seeing as about a half dozen humpbacks wash up on the Oregon coast each year. Marine experts later determined it was a sperm whale.

“You can tell by its large jaw they have this really big mouth lined with a bunch of teeth it has a very distinct look,” explained Tiffany Boothe, the assistant manager at Seaside Aquarium.

The aquarium is part of the Marine Mammal Stranding network, meaning they respond to animals dead or alive along the Oregon coast. They then report their findings to Portland State University. Sunday morning, they removed the whale’s lower jaw and teeth. A pool of blood from that procedure surrounded the whale’s head several hours later.

“A lot of scientific value can come out of the lower jaw and unfortunately there are people out there who will come and carve the teeth out so it’s really important for us to get that whole jaw off as soon as we can,” said Boothe.

It’s a 40-foot-long male. They’re planning a necropsy later in the week to find out why it died. They will be focusing on the large propeller-like gash in its side.

“I don’t know I just feel bad for animals,” added a young boy who was there with his dad.

“There’s not a lot of whales left and so it’s always sad when we see one that gets beached,” one man said.

It will stay on the beach to naturally decompose. Marine experts encourage people to look but from afar.

“We ask people not to touch marine mammals can carry diseases that can be transmitted to humans and pets so it’s just a good idea especially since we don’t know exactly what happened to the whale to keep your distance,” said Boothe.