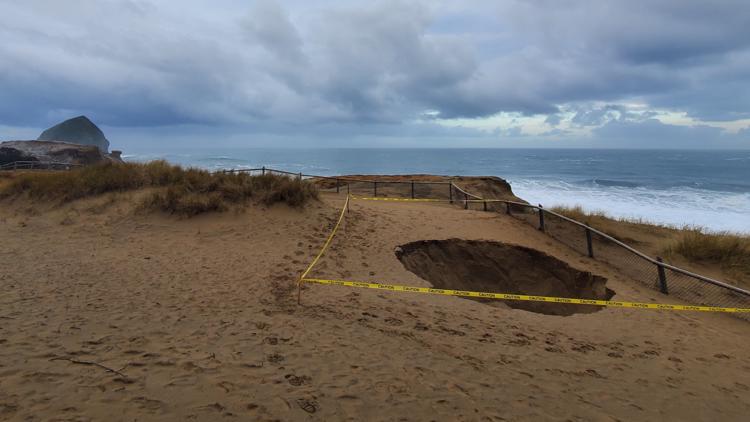 Oregon Parks and Recreation Department is trying to determine what caused the sinkhole. Park staff blocked off the area near it as a safety precaution.

PACIFIC CITY, Ore. — People traveling to Cape Kiwanda on the Oregon coast may notice a new geological feature: a 20-foot-wide by 15-foot-deep sinkhole.

Visitors reported the sinkhole to the Oregon Parks and Recreation Department on Sunday. It is located in the lower northwest corner of the dune. Park staff blocked off the area near the sinkhole as a safety precaution. They are asking people to keep children away from the edges and their pets on leashes.

“The cape is a dynamic environment. Please be aware of your surroundings, stay clear of any dangerous areas, including this one,” said Jason Elkins, a park manager with the Oregon Parks and Recreation Department. “Obviously people are curious and may want to see it for themselves, but we ask that you respect the barriers that are in place and observe from a distance.”

Several people reached out to KGW and shared photos of the sinkhole.

Cape Kiwanda State Natural Area, made up of a sandstone outcropping, is located just north of Pacific City. The Oregon Parks and Recreation Department said that sandstone is naturally much weaker compared with harder rock like basalt, so it is prone to sudden changes.

The Oregon Parks and Recreation Department is trying to determine what caused the sinkhole.

“It’s a dynamic environment on the cape here, usually the changes are due to wind, rain events, or wave action,” said Elkins.  “This one’s a little bit different, we haven’t seen this before on the cape.”

Park officials said the hole could change and others could appear. Visitors who see anything concerning can report it to Cape Lookout State Park staff at 503-842-4981.