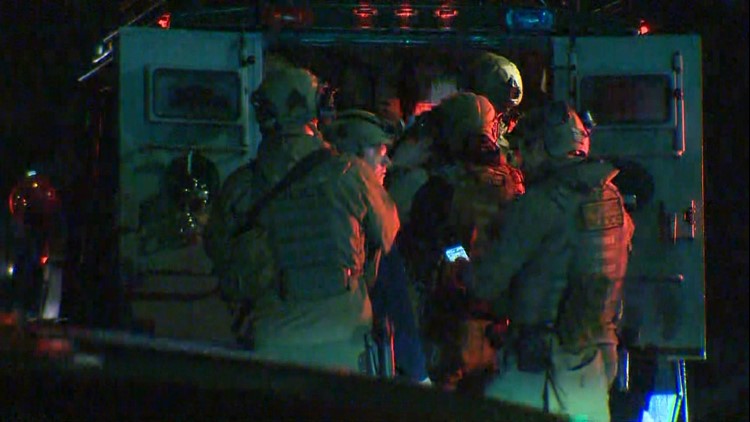 Only one victim was taken to the hospital after the shooting near SE Main Street. Nobody had been arrested as of Sunday night.

Dozens of officer swarmed the scene. One victim was taken to the hospital. Police said others were injured but the nature of those injuries weren’t immediately clear.

“They are not the only victim at this point. There were other people that were injured as for the extent of those injuries that is currently unknown,” said Portland Police spokesman Derek Camron.

The incident took place at a home. There have been no arrests made at this time.

KGW spoke to a neighbor who wanted to remain anonymous that also confirmed the incident.

“There was a man barricaded in the house. He had shot someone. Officers said we had to move back because it was an active scene and there was an active shooter,” said the neighbor.

They also stated, “I just wish that we all get together and get this area to be much better, you know. It’s not good for anyone and to see all of these police officers, dogs and swat team. This is really serious. There have been issues. Always something here on this side of Main street where officers are always down there.”

The Portland Police Crisis Negotiation Team and its version of a SWAT team searched the neighborhood but didn’t locate any suspects.

Portland has seen a documented rise in homicides since 2019, particularly deadly shootings. The city’s homicide rate rose 207% from 2019 through the end of 2021.

This year has been a continuation of that trend. By the end of November, PPB had recorded 1,185 confirmed shootings in the city, with 355 people injured. Of the 91 total homicides thus far this year, at least 74 have been shootings, as of last week’s count.

The homicide numbers provided by PPB do not include people killed in police shootings. There have been nine shootings involving Portland police this year, the most since the agency began posting this data in 2010. Four of them were fatal.