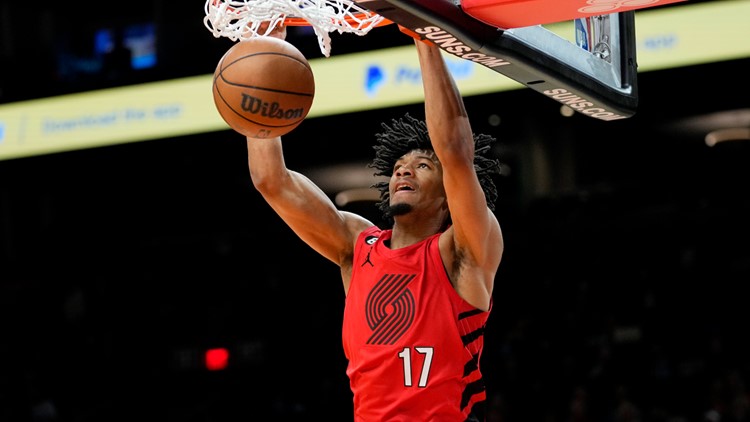 This will be the second time in the past three seasons that a Blazers player has been in the dunk contest. Anfernee Simons won the contest in 2021.

PORTLAND, Ore. — Portland Trail Blazers rookie guard Shaedon Sharpe will compete in the dunk contest during All-Star Weekend in Salt Lake City, according to Shams Charania of The Athletic. The contest will take place on Saturday, Feb. 18.

The Blazers selected Sharpe seventh overall in last summer’s NBA draft. He’s carved out a role as a rotation reserve for Portland in his rookie season, averaging 7.9 points and 2.5 rebounds in 19.7 minutes per game. He’s also established himself as one of the NBA’s most athletic and gifted dunkers.

Sharpe has 29 dunks in 36 games this season, according to Basketball Reference, which ranks third on the team behind Jerami Grant (40) and Drew Eubanks (36).

Check out this compilation of Sharpe’s dunk this season, put together by NBA writer and podcaster Brett Usher:

Shaedon Sharpe has some of the craziest bounce ever. Here are ALL of his dunks so far this season: pic.twitter.com/xrbed0tVaN

The first dunk contest was in the American Basketball Assocation (ABA) in 1976. The ABA merged with the National Basketball Association (NBA) later that year and the NBA brought the contest back the following season. After that, it didn’t happen again until 1984 and Blazers guard Clyde Drexler was one of the competitors.

Drexler competed in five dunk contests, followed by Jerome Kersey, who competed in four. The other Blazers players to compete were James Robinson in 1994, Rudy Fernandez in 2009, Damian Lillard in 2014 and Simons in 2021.