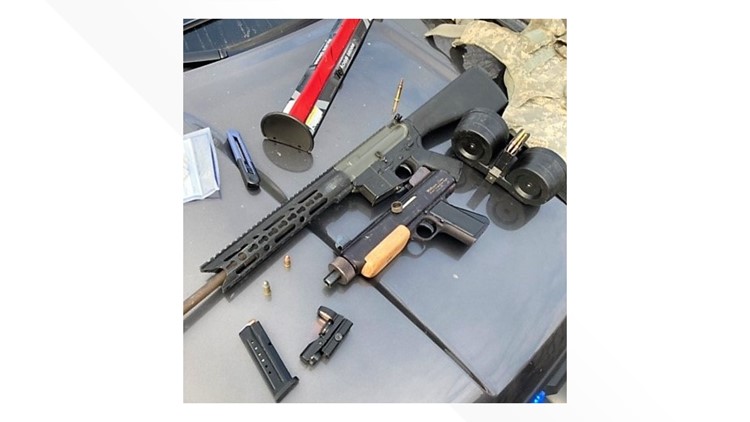 Police said a felon was in possession of two firearms and drugs during a traffic stop.

PORTLAND, Ore. — Guns and drugs were recovered during a traffic stop in Portland’s Hazelwood neighborhood, which led to an arrest of a felon earlier this week, according to the Portland Police Bureau’s East Neighborhood Response Team.

Police said officers pulled over the suspect near Southeast 100th Avenue and Mill Street around 9:50 a.m. on Dec. 14.

Officers had learned that the driver was a felon and had firearms in the vehicle.

An AR-15 rifle with a fully loaded 100-round drum magazine, a loaded 9mm semi-automatic pistol and body armor with rifle plates were seized. Additionally, 13 grams of meth, 30 fentanyl pills and forged instruments were recovered according to police.

The driver, identified as Chance Savage, 43, was arrested on several felony and misdemeanor charges. He was booked into the Multnomah County Detention Center on Wednesday afternoon. Court records show he was released the following day on his own recognizance.

Our Neighborhood Response Team recovered this AR-15 rifle with a 100-round magazine, fully loaded, on a traffic stop in the Hazelwood area Wed. morning about 10a. The driver is a felon and also had a pistol, body armor with rifle plates, meth, and fentanyl. He went to jail. pic.twitter.com/7nKJpWUXGc

Portland Police have taken 24 illegal guns off the streets of East Multnomah County since their enforcement missions began in November 2021.