Santa Claus has come to town 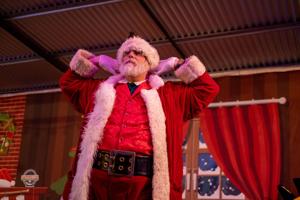 HERMISTON — Doug Primmer starts growing out his beard in August in preparation for something he said he loves. And on Thursday, Dec. 1, he was engaged in that activity — playing Santa before a large crowd of people in downtown Hermiston.

Dec. 1 was the Hermiston Tree Lighting Celebration, an annual event in which Santa appears and flips a switch for the town’s tree to light. Then, the jolly old elf sits down to meet with children and hear their Christmas wishes.

It is one of several events for Primmer. As Father Christmas, he attends others, and he’s been playing Santa at different places for 25 years.

He said he keeps a busy schedule, doing many nearby events but also traveling to Spokane and other out-of-town locations.

“I’ve got a lot of other things going on,” he said. “But it’s one of those things that’s important to me. I basically block out the month of December and don’t make a lot of commitments to anything else because I get calls from people.”

In addition to starring at events, he said he also visits families at their homes, appearing as Santa for people’s private Christmas parties.

He visits local hospitals, too.

Primmer speaks on being Santa

Primmer, who is also a member of the Hermiston City Council, said he remembers the first time he was Santa, a quarter century ago. It was at an event, called Christmas Express.

“It was a very physical job back then,” he said.

He said he had to run from house to house, delivering presents and spending time with children to meet and take photos.

According to Primmer, he didn’t feel nervous or out of place when he started.

“Well, I’m kind of built for it,” Primmer said, laughing, as he noted that he is a large man.

There was more to being St. Nick than being the right size, though, he said.

“I love being someone that kids can feel comfortable with, being around the kids and helping them,” Primmer said.

Primmer, who works for the Umatilla County Sheriff’s Office, said that one of his “fonder Santa memories” was tied to law enforcement.

Christmas Express was an event carried out by local police, And, one year while Primmer worked the event, he visited the home of an what he recalled being an exceptionally poor family.

When Primmer entered the house, he said, Primmer, dressed as Santa, saw a three-year-old boy standing in middle of a room. According to Primmer, the boy saw him and dropped whatever he had been holding. Then, he whispered Santa’s name.

Then his voice grew louder.

“He said, ‘Santa’s here. Santa’s here. And then he screams it. He runs over here, and he gives me a hug,” Primmer said. “I still get this big lump in my throat when I think about this now.”

This was more than a typical hug, Primmer said. Rather, it was “the sort of hug that you feel for the rest of your life.”

“You want nothing more than to fix this little guy’s problems,” he said.

Primmer said he did not correct all of the child’s troubles, but he did make the kid’s life brighter for a moment. Also, he gave a toy to the boy.

This encounter, and ones like it, affect Primmer, too, he said. Such meetings, he said, sustained him as an officer.

“In law enforcement, you deal with some of the worst days in people’s lives and the worst things that happen, and it’s days like that little moment there that make your life better, that allow you to be doing what you’re doing,” he said.

Typically, he said, children ask for popular presents. There will often be a gift that is valued by a lot of kids. He said he’ll hear about the hottest video games or other technology.

“The one thing that was asked of me, when I was working for foster families, a younger girl, in her early teens, she was teetering on the edge of whether she wanted to talk to me,” Primmer said. “She came over, sits on my lap and she said, ‘All I want for Christmas is for my parents to stop fighting,'”

Primmer said he would “do whatever he could.”

What he said he really wanted to do was take off his costume, change into his police uniform and meet with her parents.

He said he wanted to talk with the child’s mom and dad and tell them the damage they were doing to the girl.

Instead, he said, he comforted the teenager and wished her well.

There have been other people like this, he said, people who would talk to Santa when they couldn’t speak with anyone else. And he tries to make them feel better, he said.

In 2021, the Christmas tree lighting event featured a different Santa. That Santa’s name was John Perkins, a Umatilla man who, like Primmer, appeared places as Santa.

It was Perkins’ last tree-lighting. He died in August.

At the time of the tree-lighting event, he had already been diagnosed with stage-four cancer. Perkins struggled through it. He said he was exhausted, but also stated that the appearance meant a great deal to him.

Primmer said he was familiar with Perkins, spoke briefly to him on occasion over the years and knew of Perkins’ illness.

“He loved doing it. He lived for playing Santa,” Primmer said.

Quoting the “Bill and Ted” movies, Primmer expressed his hopes for his community.

“Be excellent to each other,” he said. “That’s the one thing, if we could get people to be nice to each other, that would be so nice.”

Primmer stated that he lives a “fortunate” life. He has a family, he said, and the are healthy and “in a good place.”

“I don’t want for anything,” Primmer said.