Report: Mayor Wheeler to propose camping ban across Portland and build mega-camps as an alternative 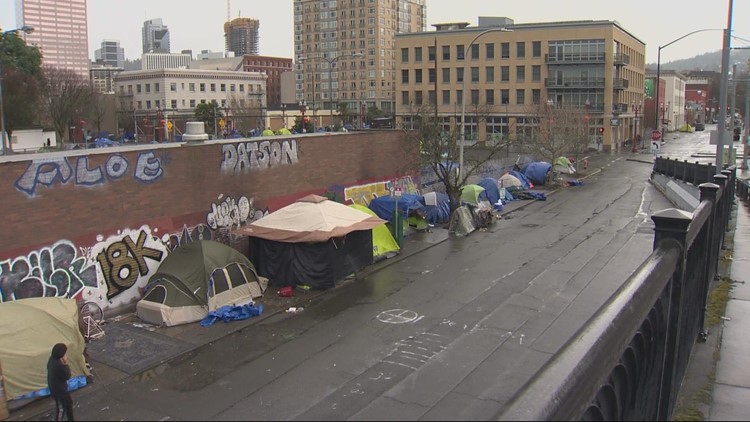 Mayor Ted Wheeler is set to announce a new plan to manage the city’s homeless population. It includes a ban on unsanctioned camping, according to Willamette Week.

PORTLAND, Ore. — Mayor Ted Wheeler is set to propose the banning of unsanctioned camping across Portland and build large sanctioned homeless camping areas as an alternative, according to a Willamette Week report.

The mayor wants three 500-person homeless “campuses” with each campus divided into four 125-person camps, the report states. The city would look to have these new propose sites be managed by outside contractors.

KGW reached out to city hall to confirm and got a two-sentence response from the mayor’s office.

The first sentence read, “City Commissioner Dan Ryan and I want to complete our outreach to elected leaders who have key responsibilities related to the issues of affordable housing and homelessness before we finalize any proposals that will be announced next week.”

KGW visited Portland’s old town and the Street Roots office on Friday. Vendors of the homegrown paper are either homeless or have been there.

“Nobody, nobody wakes up and decides to be homeless,” said Racheal Dulaney, a Street Roots vendor and ambassador.

Racheal Dulaney is now in a tiny home village, and one step away from permanent housing. She is not in favor of large, sanctioned camps.

“I’ve been through the shelter system with it being hundreds of people in that shelter and I fell through the cracks completely.”

KGW also got a response from Multnomah County leadership on Friday that included sharing a draft letter from the mayor and Commissioner Dan Ryan. The letter generally spells out this campus proposal, but it puts all the responsibility for building and operating all houseless shelters on the county, not the city.

County Chair Deborah Kafoury gave KGW a statement laying out what the county is already doing, with a final line stating:

“If the mayor’s office wants to “clean up” this city and enforce time, place and manner laws, they don’t have to hide behind me or anyone else. They can just do it.”

KGW will continue to follow this story and update it as more details are made available.