Power outages in Oregon on Tuesday worst in the nation 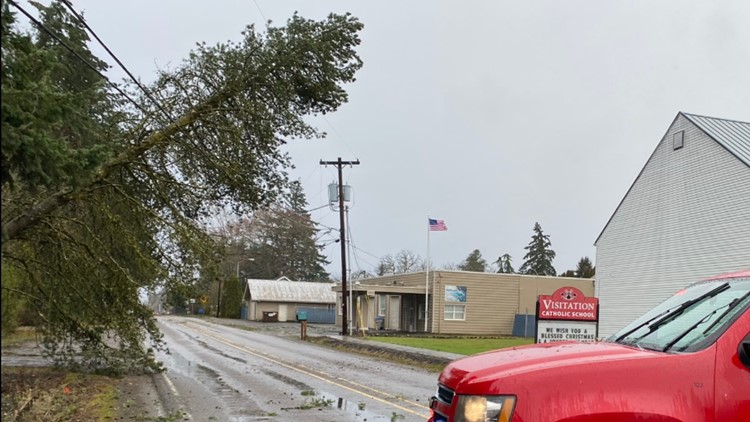 Portland General Electric reported a peak of more than 117,000 customers without electricity on Tuesday afternoon.

PORTLAND, Ore. — Power outages in Oregon were the worst in the U.S. on Tuesday, according to a website that tracks power failures across the country. Tens of thousands of people woke up in the dark, as strong winds and heavy rain from a storm hit Oregon.

The website, Poweroutage.us, collects and records outage information from utility companies. The website listed Oregon in the number one spot for number of customers affected by power outages, followed by Washington and California.

Downed trees and power lines were reported around the Portland metro, the Interstate 5 corridor and parts of the Oregon coast throughout the day on Tuesday.

“These winds are blowing debris into our lines, taking down trees and damaging high-voltage transmission lines,” Dale Goodman, Portland General Electric director of utility operations, said in a statement. “The sustained winds make it challenging for crews to safely work in bucket trucks and on high wires, where we are seeing the impacts of the winds on our equipment.”

Around the same time, Pacific Power reported 472 power outages in the state, affecting nearly 18,000 customers, the majority of them located in southwestern Oregon and along the northern Oregon coast.

Pacific Power said it has mobilized 250 personnel to assess and repair damage caused by the winds. The utility said there nearly 50,000 customers without power at the peak of the wind event earlier in the day.

PGE said it had more than 600 personnel and contract crews on hand as of late Tuesday afternoon, with more crews on the way from California, Idaho and Washington, but that it would take time to make repairs due to the extent of the damage and the ongoing afternoon winds.

The widespread power outages come on the heels of an ice storm that arrived to the region last Thursday and brought down trees and power lines, and left thousands of people in the dark.

RELATED: How to contact your power company in the case of an outage

The National Weather Service issued a Wind Advisory for much of the Portland-Vancouver metro and the I-5 corridor. The advisory remains in effect until 7 p.m. on Dec. 27. The winds could reach up to 45-55mph and the highest threat for strong south winds will be in the morning, according to KGW meteorologist Rod Hill. Salem reported south gusts nearly 50mph early Tuesday morning, Hill said.

The NWS has issued a High Wind Warning for parts of the north and central Oregon coast. The warning will also remain in effect until 7 p.m. Southwest winds gusts could blow up to 55-75mph.

Much of the Northwest is under some type of weather warning or advisory today. The headlines I am tracking include a high wind threat for the coast, the I-5 corridor and the Columbia Basin and central Oregon. pic.twitter.com/SUBJjdhXXL

Here are some tips from utility companies on staying safe around downed lines:

This is a developing story and it will be updated.