It’s been a long wait, and given our incredibly warm, dry and recently smoky October, it may have seemed like snow would never fall in the Oregon mountains.

But the flakes fly furiously Friday night and beyond!

It’s a bit early for a true Powder Alert since we’re a long way from Opening Day. But I love that Oregon’s ski areas are making announcements for their opening days—most are targeting the typical opening day time frame around Thanksgiving (see the Conditions Report for updates).

And I think that’s a reasonable expectation. I’ll explain why and talk about snow forecast for the whole season, too.

Over the next 7 days, we get snow in the mountains! As the graphic below shows, northern areas will be more favored for heavier snowfall that southern areas of the state. But that’s okay, it’s only October. This is the beginning of our snowpack.  All indications coming from the medium-range guidance suggests frequent storms over the next two weeks. Snow levels will fluctuate before and after each storm as usual. But by the end of the first week of November, we may see bases of a couple feet at Oregon ski areas. Usually, the resorts want to have about three-feet before opening, depending on snowmaking circumstances. Regardless of the actual accumulations through Halloween, we should be off to a good base-building start. 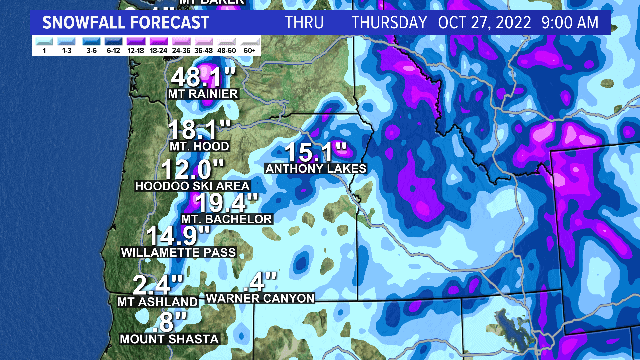 As for the forecast for the entire ski season, the outlook is excellent!

We’re going  into the third of back-to-back-to-back La Niña. This looks to be a weak La Niña, which tends to bring above average snowfall to the Cascades and the Northwest. The snowfall typically tapers quickly as you move south into California. But for us, the season should be another great one. Check out the maps for NOAA’s winter outlook below, and you can see it favors heavy precipitation and colder than average weather in the Northwest. Perfect for producing big mountain snowfall. 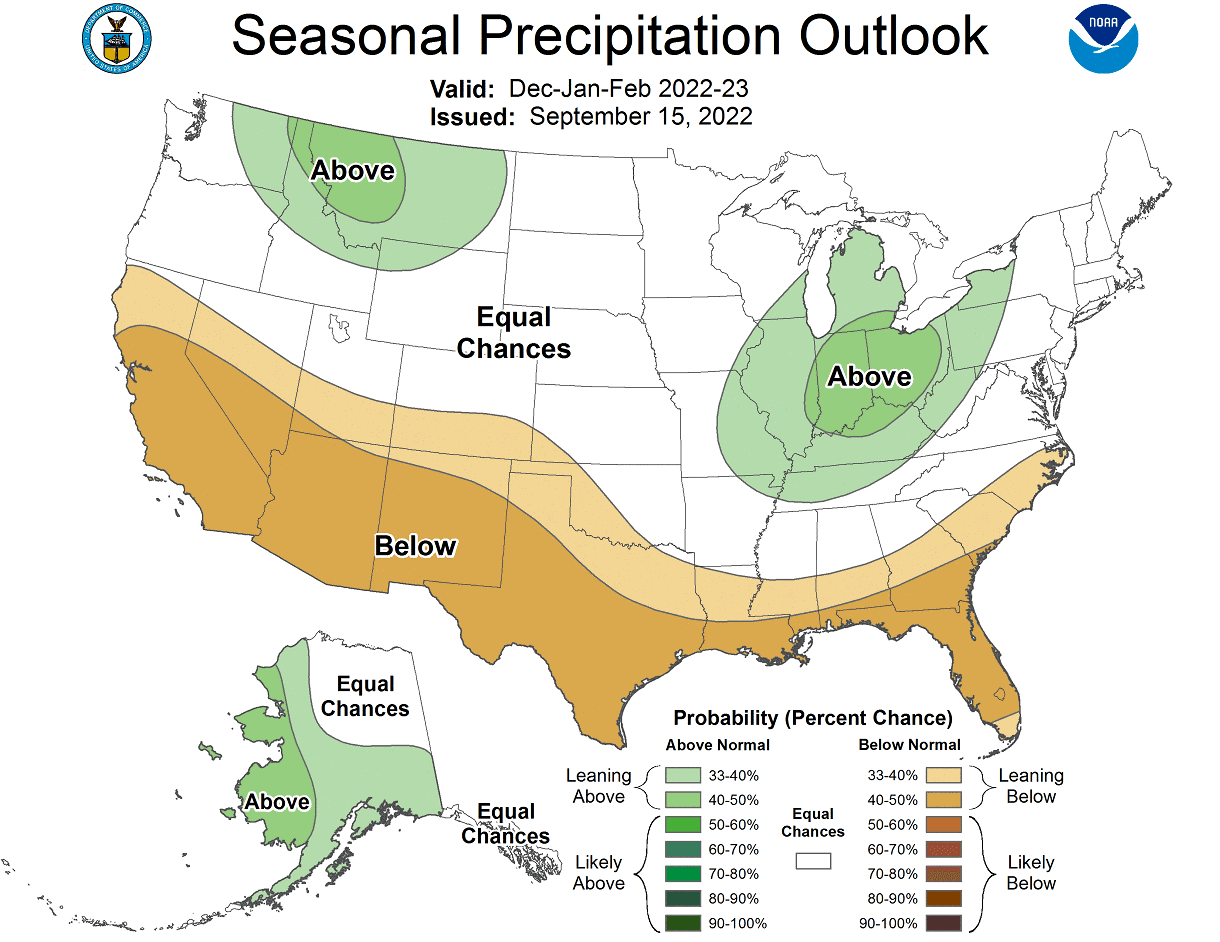 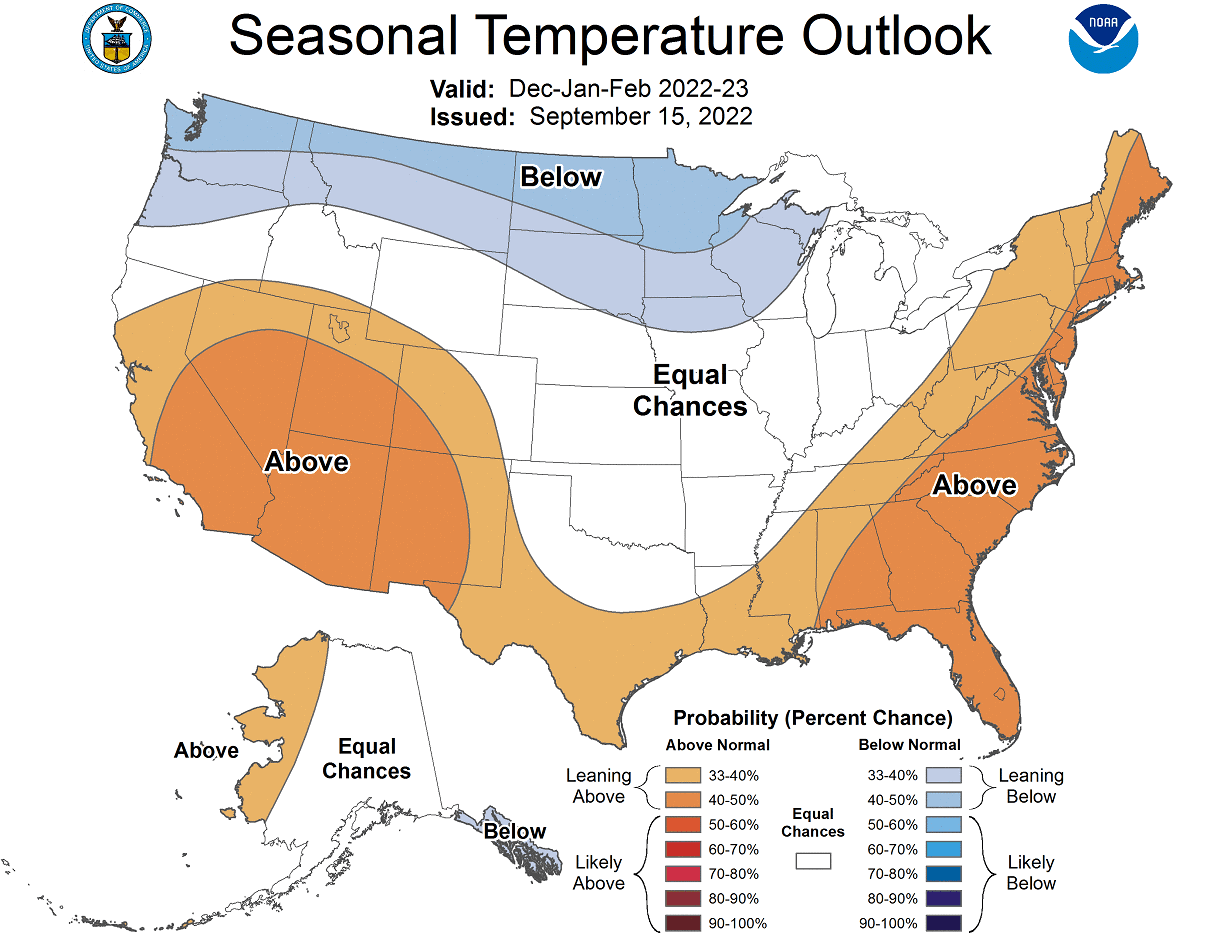 Looking at some specific models forecast, there’s pretty good agreement that we’ll see  higher than average pressure over the eastern Pacific. That can be great for us if it’s far enough west to allow storms to drop in from the northwest. That’s a highly productive snowfall pattern for us! But if that eastern Pacific high is too far east, we can end up dry, but cool.

I think December will bring enough snow to ski the holidays, but I think January and February will be the big snow months for us, breaking the pattern of dry mid-winters from the last couple of years.

On the whole, I think Northwest skiers will have lots of powder driven perma-grins this season, and I’ll be busy writing frequent powder alerts.

I’ll publish the next one when conditions warrant, or when things get interesting.

In the meantime, don’t forget those ski leg work outs! Crush those squats and lunges!