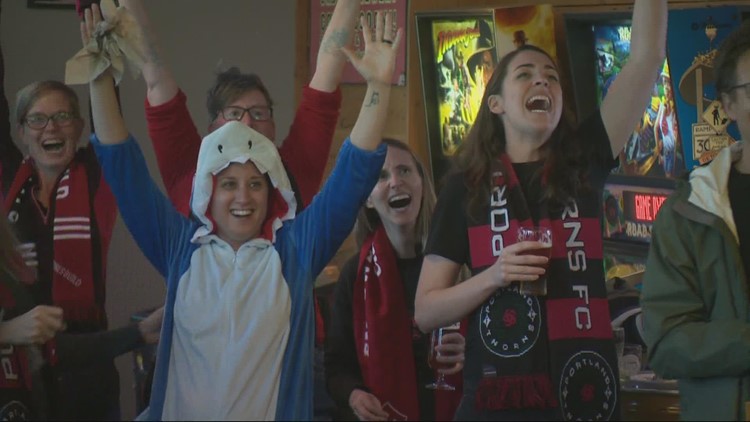 The Sports Bra bar in Northeast Portland was packed with Thorns fan watching and celebrating them winning the NWSL championship game.

The Thorns won their third championship with a 2-0 victory.

At The Sports Bra in Northeast Portland, a bar dedicated to women’s sports, it was so crowded they put a sign on the door telling people to find other spots to watch the match. Those who got inside got there really early.

“Two o’clock this afternoon so we could sit at the bar and have great seats in front of the tv” said one supporter.

Among those at the bar was Oregon Senator Ron Wyden, who cheered on the team with fans.

The Sports Bra here in Portland is at capacity and ready for @ThornsFC to bring home the win. #BAONPDX pic.twitter.com/JLxnkUnVKN

The watch party was one of six official watch parties hosted by Portland Thorns FC in partnership with local businesses.

Hopworks Urban Brewery on Southeast Powell Boulevard was one of the locations that hosted fans. Every TV was tuned in to the match and the fans were worked up from the opening whistle. After the match ended in a win for the Thorns, there was relief and joy.

“We deserve this, the girls deserve this. We’re all super excited for them, they worked for it,” said a supporter.

Even Timber Joey attended the watch party to support the team.

He said, “I’m so proud of those women, so proud. They’ve done so many incredible things. I’ve been in tears multiple times this season over this. I’m happy they got what they deserved, it’s amazing.”

The team returned to Portland on Sunday afternoon. They’re expected to hold a championship celebration at Providence Park this week.