Portland restaurant is feeling the pressure as egg prices soar 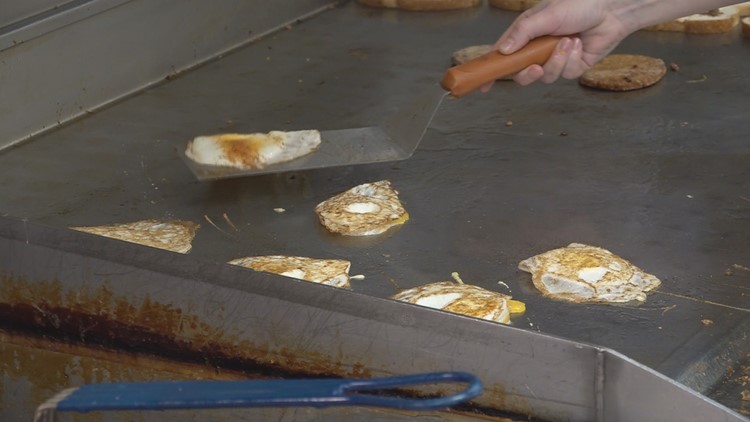 The owner of Fried Egg I’m in Love said that rising egg prices are causing them to have to raise the prices of their popular breakfast sandwiches.

PORTLAND, Ore. — Portland restaurants are having a huge impact as the prices for eggs continue to rise amid a national supply shortage. One restaurant in particular is feeling it the most as it specializes in egg sandwiches primarily.

Jace Krause, owner of Fried Egg I’m in Love, a breakfast egg sandwich spot located in Southeast Portland, recently had to increase the price of the sandwiches because of the expense. According to Krause, in January of 2022, a case of eggs was $30, that price rose to $65 in May of 2022, and now this January, the price rose to $100 a case.

“We bumped up our prices a little bit,” Krause said, “just temporarily. If prices go back down, we will take it off, but if prices stay, I might have to raise them again.”

The U.S. Bureau of Labor and Statistics said back in December that the average cost of a dozen Grade A large eggs hit $4.25, which is up from $1.79 one year earlier. Krause said the cost increase has been very stressful.

“Sometimes we are going to the grocery store because they are giving us a supply of cheaper eggs, we are just trying to do what we can,” said Krause.

An alternative for some people could mean raising their own chicks to get eggs. At Burns Feed Store in Gresham, General Manager Kasey Geertz said there are a lot of people wanting chicks so they can have their own supply of eggs.

They are getting a shipment of chicks in February and the season runs until August.

“We do pre-orders of chicks and we already had to re-order our first couple, we had to up the numbers to make sure we have enough for everybody, so we are seeing an increase,” said Geertz.

When it comes to raising your own chicks for eggs, Geertz said, it’s a lot of work but very rewarding. It takes approximately four to six months for the chicks to start laying any eggs.

“You have to take care of the chicks,” Geertz said, “you have to feed and water them.”