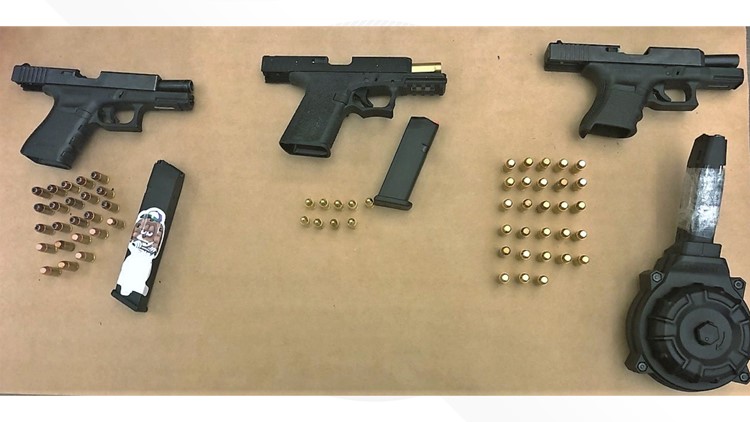 According to Portland police, one of the guns seized included an extra high-capacity drum magazine.

Bobby Garland, 20, of Milwaukie and Terrance Greeley, 22, and Amir Griffin, 22, both of Portland were arrested and booked into the Multnomah County Detention Center. A fourth person remained near the vehicle and was detained temporarily but released without charges.

The arrests come after an East Precinct officer spotted a black BMW 750 driving erratically down Southeast Division Street under I-205 freeway at around 11:15 p.m. on Friday. The officer initiated a traffic stop but the driver accelerated ahead as he merged onto northbound I-205, according to the officer. He did not pursue.

After a short period of time, the Portland Police Air Support Unit located the BMW, police said, and appeared to still be speeding as it merged onto westbound I-84

The driver continued speeding, going on and off the freeways for nearly 20 minutes. According to police, the driver ran multiple red lights and was driving as fast as 100 miles per hour in residential areas.

At one point multiple officers were able to bring out spike strips to attempt to stop the drive. But the BMW appeared to have run flat tires, tires that could continue to function after loss of air pressure.

The vehicle came to a stop in the 7600 block of North Lombard Street in the St. Johns neighborhood. Four suspects ran from the vehicle throwing objects as they can which were later identified as handguns, police said.

Officers surrounded the area to contain the suspects. During the search, officers recovered three loaded guns, including one with an extended capacity drum magazine capable of holding 50 rounds of 10mm ammunition.

There was no injuries reported.

The three suspects are facing multiple charges including attempting to flee police on foot and unlawful possession of a loaded firearm.