Portland Marathon comes running back for its 50th year 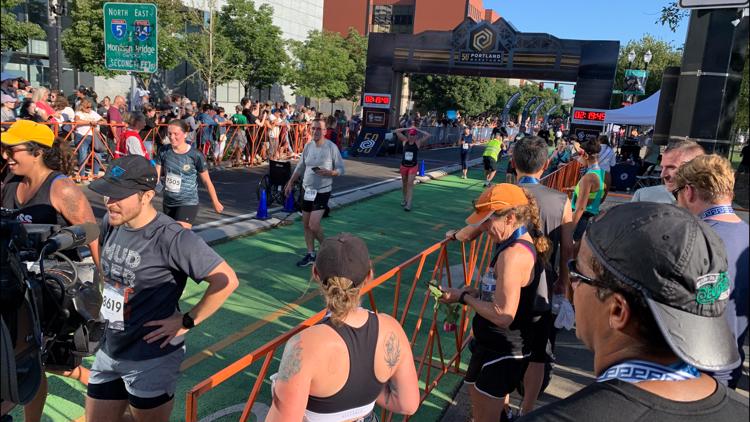 Rebounding from a cancelled 2020 event and a lower 2021 turnout, thousands of runners and supporters filled Rose City for the race’s 50th anniversary.

PORTLAND, Ore. — All was set before dawn Sunday, with everything ready to go for the 50th Portland Marathon.

Then came the sunrise start, with the front of the pack leading the way on Naito Parkway at Salmon Street Springs. The marathoners were ready to run the 26.2 miles across bridges and through 20 Portland neighborhoods, joined by a large contingent of half-marathoners.

More than 7000 runners took part altogether, doubling last year’s count, which was itself a bounce-back year following the 2020 COVID shutdown. And the runners on Sunday had support from thousands more spectators, equipped with encouraging signs and, of course, the cowbells.

“We’re super pumped up right now, runners and supporters out in droves; it’s wild out there, it’s a lot of fun and we’re feeling great,” said Chris Braun, brand manager for the marathon.

The marathon runners got a boost from the crowd as they came back around at the 8-mile mark, and not long after that, the top half-marathon runners crossed the finish line.

The male and female first place winners for the half-marathon were both Portlanders from the Bowerman Track Club, and they’re each preparing for a California full marathon later this year.

“Having it be local race is just easy for me logistically, getting to sleep in my own bed, and this is a good tune-up race,” said men’s winner Chris Maxwell.

Women’s winner Cara Welling, originally from the southwest, said she loved the weather conditions Sunday morning as Portland continued on an unusually warm and dry streak that has now pushed all the way into October.

“No rain, beautiful sun and great time… I’m (originally) from Arizona so it’s not too warm here for me,” she said.

At the two-hour-37-minute-mark, marathoner Matt Spear went around the winner’s tape in deference to two leading competitors who had gotten off course. But Spear earned first place.

“It’s hot man, that’s about all I can say, but a lot of good people out and friends and family on the course,” he said. “I came in from Seaside, so not used to the warm weather, but good vibes and good time.”

With thousands of runners racing on Sunday, it was an inspiring time in the city, vividly confirming that the Portland Marathon was back to full force.