Portland is getting sleet and freezing rain this week. What's the difference between the two? 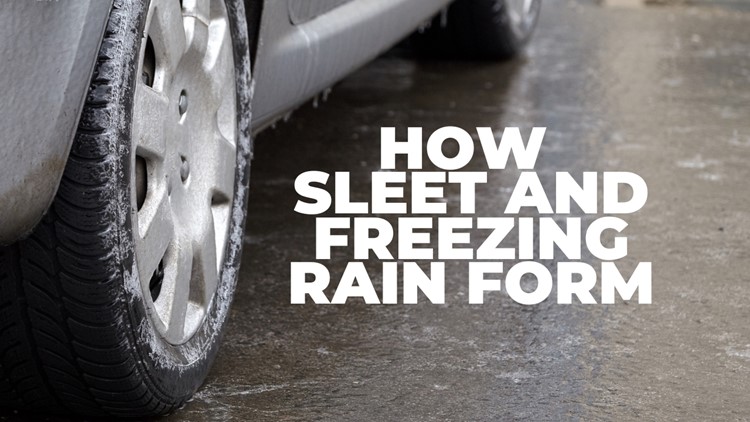 Both types of winter weather are expected as part of an ice storm in Portland this week. But how are they different, and how do they form?

PORTLAND, Ore. — An ice storm is expected to hit Portland in the final few days before Christmas, dumping large amounts of sleet or freezing rain on the metro area, the Willamette Valley and Southwest Washington amid frigid temperatures.

Sleet and freezing rain both have the potential to wreak outsized havoc. They can leave roads icy and traffic snarled, and freezing rain can cause heavy sheets of ice to build up on outdoor surfaces, bringing down tree limbs and power lines.

But with temperatures predicted to be in the 20s, Portlanders might find themselves asking: Why are we getting ice rather than snow? And what do those terms actually mean, anyway? What’s the difference between sleet and freezing rain, or snow and hail for that matter?

They’re all forms of precipitation, but the difference has to do with how they make the journey to the ground — or in the case of hail, how it forms in the first place. We turned to the National Oceanic and Atmospheric Administration and KGW meteorologist Rod Hill to break it down:

Let’s start with snow and regular rain. Snow happens when ice crystals form from water vapor in clouds and fall to the ground. If the air temperature remains below freezing all the way down, it lands as snow. If the air is warmer at low altitudes, the snow melts into water droplets and lands as rain.

But what if temperatures are below freezing down at ground level, with a warmer layer of air above? That’s how we get sleet and freezing rain.

Sleet forms when the falling snow passes through a warmer layer of air and melts, but then passes through another cold layer and refreezes before it hits the ground. Instead of refreezing into intricate ice crystals, the droplets turn into tiny solid pellets called sleet.

Freezing rain goes through the same process, except the rain doesn’t have time to refreeze before it hits the ground. But if ground-level temperatures are below freezing, the already-cold rain droplets will freeze as soon as they land, building up sheets of ice on outdoor surfaces.

In the case of the ice storm heading for Portland, Hill explained that sustained east winds Thursday and Friday will pull in cold air from the edge of an Arctic air mass in the eastern half of the state, pushing ground-level temperatures down into the mid to low 20s around Portland.

At the same time, a warmer air mass from the Pacific Ocean will slide in over western Oregon, Hill said, but at a higher altitude than the cold air from the east, thereby creating the warm air layer that will melt the falling snow. The colder low air layer will then turn it into sleet or freezing rain.

By the way, the term “ice storm” refers to freezing rain events that build up dangerous levels of ice on the ground, typically at least a quarter inch of ice, as defined by the NOAA. Portland is very likely to see that level of accumulation this week, which is why we’re using the term.

But wait, what about hail?

So if sleet is little pellets of ice, does that mean sleet is hail? Nope! Though the end result might seem similar, the two form under very different conditions and are distinct weather phenomena.

Snow, sleet and freezing rain are all winter weather, but hail is more common during the rest of the year because it forms in thunderstorms. According to the NOAA, the storm’s high winds push water droplets up to a colder level of the atmosphere where they collide and freeze into balls of ice.

So while sleet is essentially raindrops that freeze before hitting the ground, hailstones form up in the clouds and remain frozen all the way down — which is why they can be much larger than sleet pellets.