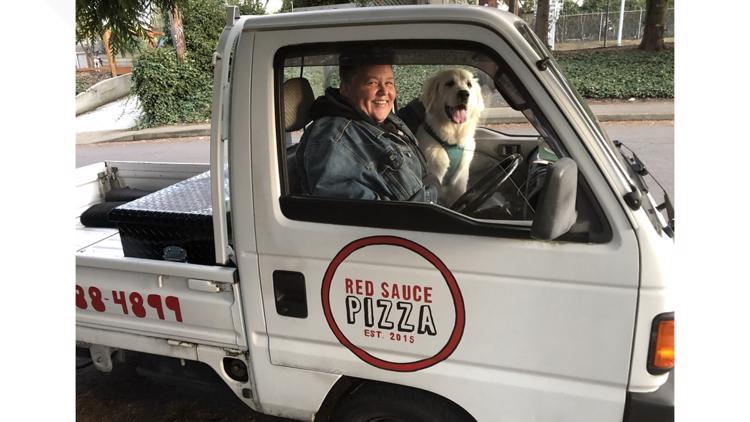 PORTLAND, Ore. — Neighbors and community members have been helping spread awareness on social media around a stolen truck. It’s not just any stolen truck. The truck is home to Red Sauce Pizza in the Beaumont-Wilshire neighborhood owned by Shardell Dues.

“This truck has a lot of sentimental value to me. It’s a stick shift but you drive on the right hand side and you have to be very coordinated to drive it — It’s good advertising and we use it for catering,” said Dues.

Shardell founded the Red Sauce Pizza in 2015. The truck is a mascot for the establishment.

“We’re a unique business and it’s a unique vehicle,” she said.

She discovered the truck was missing and noticed the ignition was drilled out Sunday morning. The vehicle was last parked right on Northeast Fremont Street. Three months prior the black truck-bed toolbox in the back of the same truck was also stolen.

“It ‘s really frustrating to realize that my car is gone because it’s just another thing I have to deal with on top of a lot of other vandalism that we’ve experienced in the last six month. So yeah, I’m just hoping that if it is recovered that it’s in someway salvageable but I’m not keeping any hope for that,” said Dues.

The owner of the pizza joint made a post this morning on social media after making this discovery in hopes of anyone spotting the vehicle around town.

The white truck pictured is a Japanese importer there is no VIN but it’s a 1991 Honda activity. The license plate is AZZIP but is pizza spelled backwards, another unique identifying marker.

“It’s probably worth about $6k to $7k. Despite the money things can be replaced. It’s such a unique truck— finding parts that are damaged is not gonna be possible,” she said.

“If they needed it to sell for money and buy food. I’d say come here and I’ll give you a free pizza instead of stealing my vehicle. I don’t know the position that there are in and obviously people are struggling. That’s why the crime rate is up because mental health and just the support for our city. I don’t think I would say anything to them to be honest,” said Dues.

Shardell is asking anyone who knows anything or spots the vehicle to please contact the Multnomah county police.