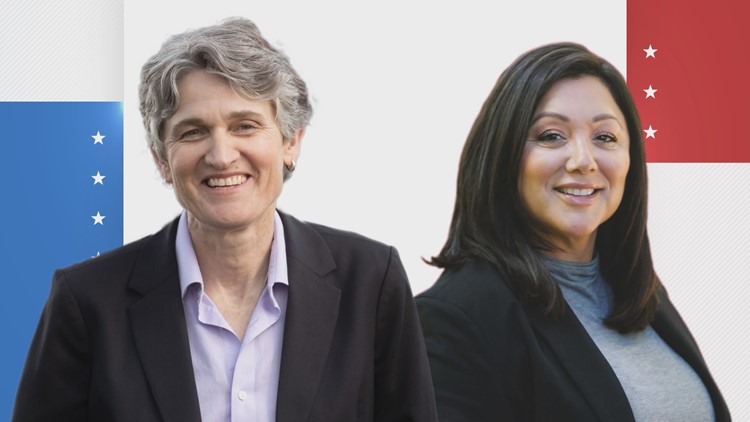 Less than a week before Election Day, some polling shows Republicans may have a slight edge in Oregon’s newly-drawn 5th congressional district.

OREGON, USA — There are just five days to go until Election Day with key races in Oregon — from governor, to a newly carved out congressional seat — looking unusually competitive.

Candidates for Oregon’s 5th and 6th Congressional Districts are putting up a fight, and some polls show the 5th District leans Republican.

Competition in the House Districts is new for Oregon politics, according to Christopher Stout an associate political science professor at Oregon State University. His research and teaching focuses on campaigns, elections, voting behavior, Congress, racial and ethnic politics.

“You have two congressional districts that have been rated by numerous agencies as either being a tossup or slightly leaning toward one part or another,” Stout said. “All of these districts have really interesting candidates, and there’s been a lot of money spent on these campaigns, and so that’s also something that’s new in Oregon politics — how much money has been flowing in.”

In the hotly contested race for Oregon’s 5th District, Republican Lori Chavez-DeRemer faces Democrat Jamie McLeod-Skinner, and some polls show her pulling ahead.

“All signs suggest that Lori Chavez rumor has a slight advantage,” said Stout, “the problem with a lot of congressional races that we don’t have a lot of polling, so we rely a lot on the generic ballot in national polls — and the generic ballot is asking voters, do you support a Democrat generally or Republican?”

“A month ago, Democrats had about a one percentage advantage and now Republicans have an advantage and things seem to be swinging in their direction,” Stout added.

Chavez-DeRemer’s campaign released a statement in response to the latest polling, writing:

“Lori is working hard everyday to earn votes from Oregonians interested in solving our critical issues. Curbing inflation, keeping our communities safe, and providing quality education for our children are issues that cross party lines and she has been honored to receive the outpouring of support from Democrats, Independents, and Republicans all across Oregon.”

“If national polls were right about this race, Jamie wouldn’t be the nominee. Jamie has an amazing grassroots team and has been endorsed by all the editorial boards in Oregon’s Fifth Congressional District. On the ground, we’re hearing great enthusiasm and energy for Jamie.”

“So if Republicans do well [in the 5th District], it shows that Oregon is not always a safe state and that it can be competitive in the right political environment and with the right candidates,” Stout explained.

As for the 6th District, with Democrat Andrea Salinas running against Republican Mike Erickson, Stout said Republicans are a less favored to win here, than they are in the 5th district, but different polls show conflicting results.

“I think what that really shows is that it’s too close to call at this point, it’s really going to depend on who turns out on Election Day,” Stout said.