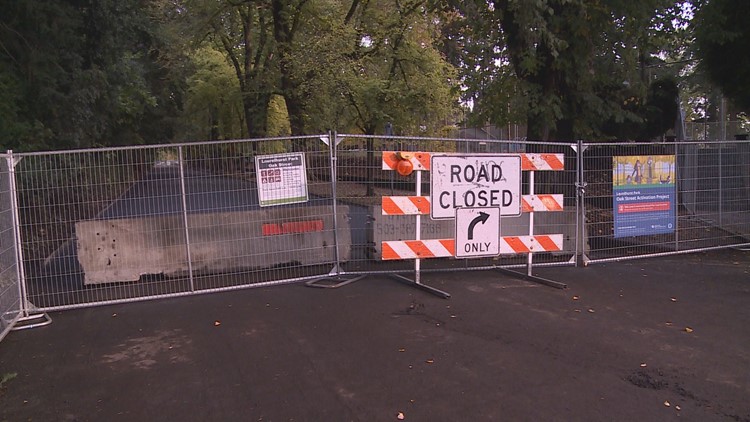 PP&R will add pickleball courts, a bicycle skills area, and a skateboard half-pipe on a now-permanently closed stretch of Southeast Oak Street.

PORTLAND, Ore. — Some big changes are coming to a stretch of road through Portland’s Laurelhurst Park. The city’s Parks & Recreation is taking over management of two blocks of Southeast Oak Street and plans to add amenities including pickleball courts and a skateboard half-pipe.

At the direction of Mayor Ted Wheeler’s office, Portland Parks & Recreation (PP&R) and the Portland Bureau of Transportation (PBOT) came to an agreement to turn the stretch into more park space. The section, bordered by the park on either side, is well-known for street camping and has seen its share of challenges over the last few years.

Barriers and signs show vehicle traffic is prohibited. PP&R confirmed the change went into effect on Oct. 31. Existing camps were clear over the last week.

“I think this place in particular feels emblematic of how the city is and how the people of the city of Portland are feeling about homelessness right now,” said Daniel Lyman, who lives nearby and walks through the park daily.

While he’s happy to hear about the additional park space, he said he hopes the people previously living in this location got the help they need.

“I think that sweeps don’t usually fix these problems,” Lyman said. “However, I know that this neighborhood in particular is very tired, I would say, just from the last couple years, as is everyone.”

Others feel strongly opposed to the city’s plan, calling it a new spin on hostile architecture.

“People have camped out here sporadically for years and they’ve been cleared out for years, and there’s nowhere else to go,” said Bob. “This actually has kind of a fun, youth friendly tone to it, but it’s extremely cruel and the normalization of that sort of cruelty towards homeless people is unconscionable.”

A rendering from the mayor’s office shows upcoming construction plans.

PP&R will add park amenities, including benches, trash cans and bike racks, as well as a bicycle skills area, a skateboard half-pipe and pickleball courts. A spokesperson told KGW these new features were determined based on the lack of such amenities in the Portland parks system.

According to the PDX Pickleball Club, dedicated public spaces to play the sport in the city limits are few and far between. At the beginning of October, the club installed and opened its own courts at Sellwood Park, which are free and open to anyone.

“I do think that Sellwood has shown the park the desire for people to come and play, and it’s been hugely successful,” said co-founder Cathy Owen. “The response — at least in terms of what we’ve heard and the people we see that show up every day and network with each other to come and play — has been huge. Those courts are busy all day long.”

Owen believes the new courts at Laurelhurst Park will only expand the options within the city.

“I thought it was a great idea. If they build it, the pickleballers will come,” Owens said. “We have lots of club members who live in that area, and all around Portland metro, will drive there just as an option.”