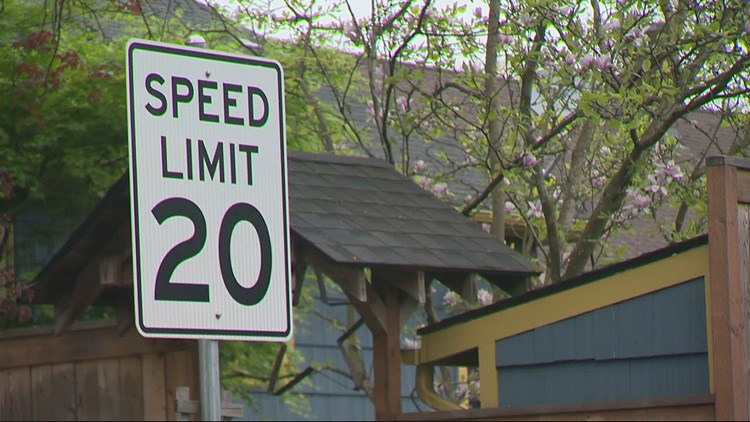 ODOT will continue to manage speed limits on state roads, but cities and counties can apply for the authority to set speed limits in their jurisdictions.

PORTLAND, Ore. — An Oregon law that will go into effect in 2023 will allow city and county officials to designate speed limits. It’s a shift from the current process where the authority lies with the Oregon Department of Transportation and a handful of traffic engineers.

“We have seen yet another tragic year of fatalities and serious injuries on our streets,” said Hannah Schafer of the Portland Bureau of Transportation.

“We have five people for the entire state which you can imagine creates a bit of a backlog when it comes to requests from cities and jurisdictions about speed limit changes,” said Matt Noble of ODOT.

The process Noble describes will soon be easier thanks to the new state law.

“It’s going to provide local governments with the authority to set their own speed limits which should very much speed up the process, make it more effective because they know their local roads best,” Noble said.

Beginning Jan. 1, Oregon’s 241 cities, as well as Multnomah and Clackamas counties, can begin applying for the authority to designate speed limits in their respective jurisdictions.

“Having local authority over speeds is really, really crucial when we’re trying to lower speeds and create safer conditions around the city,” Schafer said.

Schafer said PBOT has yet to identify specific streets or even high crash corridors in need of immediate speed limit changes.

“We are excited though for this opportunity and doing the necessary paperwork to get that full authority from the state,” she said.

Perhaps there is no better time for this than now as a record number of people are either dying or getting injured in crashes on Portland streets.

“Speed continues to be a key factor in those fatalities and serious injuries,” Schafer said.

ODOT is not completely washing its hands of speed limit oversight. While Oregon’s cities, along with Multnomah and Clackamas counties, will now be able to handle speed limits in their jurisdictions, ODOT will continue to manage speed limits on state roads.