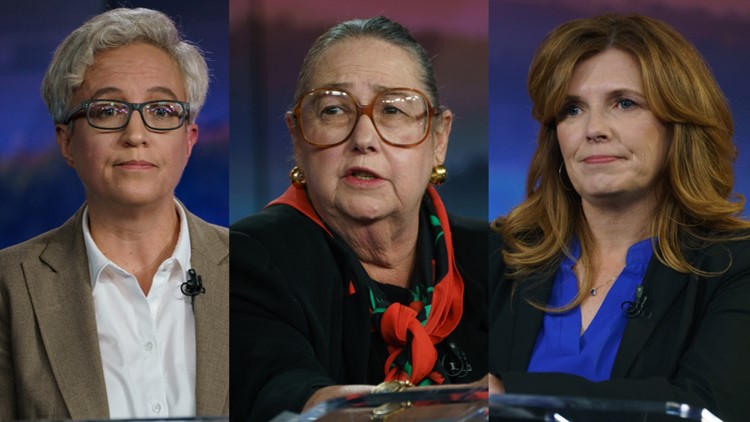 The candidates are near the end of the race spending the eve of Election Day pushing for their final votes that could make or break their campaigns.

OREGON, USA — In her final campaign rally in Canby on Monday night, Oregon republican gubernatorial candidate Christine Drazan walked up to the podium to music from the 1986 movie, Top Gun. Drazan’s campaign team noted that the last time Oregon had a republican governor, it was when that movie hit theaters. The music was also a nod to what Drazan hopes will be her turn at a 2022 blockbuster sequel.

“Everybody said republicans can’t win in Oregon,” said Drazan, from the Clackamas County Fairgrounds. “You know what? Tomorrow, we’re going to do it.”

Drazan started the day in Klamath Falls before stopping in Eugene, then her home town of Canby. She’s fully aware the polls showing her in an extremely tight race with democrat, Tina Kotek.

“It’s close because [voters] are defying their own past behaviors,” said Drazan. “It hasn’t been close in the past, but it’s close now because Oregonians are saying, ‘I’m going to do something different.’

For her part, Kotek didn’t schedule any in-person events Monday, but she thanked supporters on a video posted on Twitter.

“Thank you for talking to your friends, family, everyone in your network about election day and how important it is to move our state forward,” said Kotek.

RELATED: What can Oregon voters expect on election night?

Unaffiliated candidate Betsy Johnson started Monday morning at Bison Coffeehouse in Northeast Portland. It’s the coffeeshop police say was vandalized last month after the owner agreed to host a community event with police officers. For Johnson, it was one of her last shots at appealing to voters for support and civility.

“My request is that first of all people vote, be part of the process,” said Johnson. “Secondly, regardless of the outcome, let’s behave like Oregonians. I think that’s incredibly important and you don’t take out your difference of opinions by vandalizing somebody’s business.”

All gubernatorial candidates had one final message for voters and that was to vote. Ballots must be mailed or returned to an official drop box on or before 8 p.m. on Election Day.