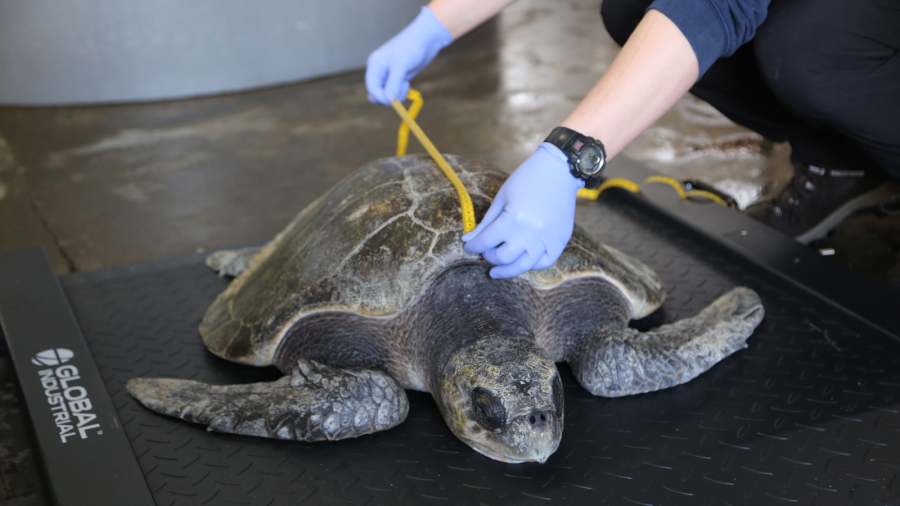 Pumpkin was found washed ashore at the Horsfall Campground located in Coos County. The Oregon Department of Fish and Wildlife responded to reports of the turtle, before transporting her to Florence. Pumpkin was then transferred to the aquarium staff.

Veterinarian Julianne Vickstrom, from the West Hills Veterinary Hospital, conducted X-rays and blood draws for the two turtles to determine their health conditions.

OCAq says that sea turtles are marine reptiles who are dependent on their environment for warmth. Therefore, Oregon’s cold waters can come as a shock for some creatures.

According to a release from the aquarium, “…these animals experience cold stunning, rendering them incapable of eating or navigating. Turtles can float in a cold-stunned state for weeks, and often sustain physical injury, infection, and dehydration before washing ashore.” Furthermore, sea turtle strandings become more common during the seasons that bring on cold currents and storms.

Pumpkin and Joanie arrived at the aquarium with body temperatures of roughly 55°F. Staff worked to increase the turtles’ body temperatures by 5°F each day, by putting them in warm baths, until they reached 75°F.

After two weeks of giving the sea turtles continuous care, fluids, and medications, OCAq aquarium staff were notified that the SeaWorld San Diego team was ready to welcome Pumpkin and Joanie into their own facilities.

Nonprofit organization Turtles Fly Too helped coordinate the animals’ travels to San Diego. Following the brief flight in their custom-made crates, Pumpkin and Joanie were met by the SeaWorld San Diego staff team who will aid them throughout their rehabilitation.

OCAq said, “The Olive Ridley sea turtle is an endangered species, making Pumpkin and Joanie’s survival even more crucial. This success is thanks to the dedication and collaboration of private citizens, volunteers, and wildlife professionals and facilities.”