On Veterans Day, 102-year-old Lake Oswego man reflects on his life and service 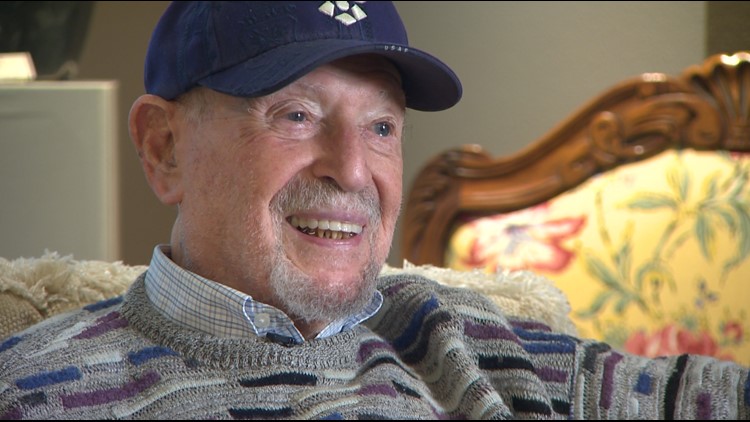 PORTLAND, Ore. — For the first time in 48 years, Portland’s Veterans Day parade wasn’t held along Northeast Sandy Boulevard. The past organizers put the parade on hold during the height of COVID-19, then decided to step down. When a new group took over, they moved the parade to Martin Luther King Jr. Boulevard, keeping it in Northeast Portland.

As in past years, the parade on Friday included marching bands, military vehicles and of course military veterans. More vets watched from the sidewalk.

Virginia Kipper is a 100-year-old veteran of World War II. She made maps during the war, and appreciates the people who come out to celebrate veterans.

“I like that. I think it’s a long time due,” Rice said. “I know the Vietnam vets, when they came back there was nothing and they were pretty much spit on. Anyway, things have improved. Ever since Desert Storm things have gotten a lot better.”

The parade brought together a lot of admiration, both from strangers and those who love veterans.

“I admire their service, their dedication and their intention to protect us in service,” said Dee Lazatin. “And the fact that I’m married to one!”

James Kotsovs served in the Marine Corps, and he wanted to make sure that people knew the history of how Veterans Day came to be.

“Today is Armistice Day — emphasizes peace,” Kotsovs said. “That’s when the peace treaty was signed in World War I.”

On November 11, 1918, the Allied powers signed a ceasefire agreement with Germany at Versailles in France. The treaty ended World War I and Armistice Day, the original name for the holiday, was later renamed to Veterans Day in the U.S.

RELATED: No, Veterans Day has not always been observed on Nov. 11

‘It was my duty to serve’

The veterans of WWI have passed on, but the Department of Veterans Affairs reports that there are roughly 167,000 U.S. veterans of World War II still alive, out of about 16 million Americans who served during the war. One of the oldest surviving veterans lives in the Portland area.

Bud Millard loves a good game of competitive bridge. Each week he spends at least an hour at work, matching wits and luck against his fellow residents at Mary’s Woods, a senior living community in Lake Oswego.

Millard is also old enough to get away with saying exactly what he’s thinking.

“I still believe in looking at a good-looking woman!” Millard said, cackling. “In six weeks I’ll be 103, if God lets me live.”

Millard admits that 103 sounds like a big number, even to him — a miracle, making him one of the “most blessed men alive today.” But he said he feels physically more like he’s in his 90s, and mentally still in his 50s. He’s never lost his zest for life, as his photographs demonstrate.

The day the Japanese military attacked Pearl Harbor in Hawaii, on December 7, 1941, it began Millard’s involvement in World War II. While much of the country reeled from the attack and impending war, Millard said he felt the thrill of future adventures.

“Well, for me it was an exciting day, because I was gonna be trained to be a pilot and that was very exciting for a 21-year-old,” Millard said.

Born into a Jewish family, Millard was eager to fly into battle in Germany, personally taking the fight to the Nazis. He’d trained to fly four-engine and two-engine bombers. But fate held a different path for him.

While hospitalized with an illness, his unit was sent to North Africa to fly P-38 Lightning fighters. When Millard recovered, he was sent to California.

“I was transferred to the Southern California defense department and my job was to alert the airfields in Southern California to arise when incoming Japanese flights would come in,” he remembered. “However, that never developed … and after that, my duties were to calibrate radar for England. And we calibrated that off the coast of California and at the same time did submarine duties in a prewar bomber called the B-18.”

RELATED: No, Veterans Day does not honor active-duty service members

Millard never did see combat. However, there was plenty of flying to do stateside. After four years, he left active duty, remaining in the reserves for another 16 years.

“Well, it was my duty. It was my duty to serve,” Millard said. “I enjoyed my time in the military, the comradery that you found. I knew I was fighting for our beliefs and it was a job. But after the job was done, my flying was done. I couldn’t wait to go home, get married, have children, have a home.”

His first marriage to his wife Adele lasted 50 years before she died from cancer. His current marriage to Katherine is now 25 years along and going strong.

Looking back now, Millard said he remembers the feeling of an America united to face a world at war.

“At that time we were as one nation,” he said. “There was no dissention among the patriots in the United States. And its kind of sad for me today to see how divided our nation has become, and how patriotism is thrown out the window. It’s a disturbing thing. Disturbing.”

Millard said he thinks the majority of Americans who retain a sense of patriotism also appreciate veterans. He often gets complimented for his service, he said, and likes to compliment others.

After living much of his life in California, Bud and Katherine moved to Oregon and to Mary’s Woods, where he’s just now beginning to slow down — a little.

“I gave up water aerobics when I was 101. I gave up driving when I was 101,” he said. “I didn’t want people to feel unhappy and unsafe driving with someone quite my age. By that time most people have already given away their cars. But I still had my sight, my hearing, my coordination, where driving was no problem day or night. Driving didn’t bother me at all.”

Millard still misses the freedom of driving. But he tried to look forward, not back. He credits his longevity to good genes, regular visits to the doctor and a moderate lifestyle. And he keeps his brain sharp playing cards with the ladies or doing crossword puzzles.

So where does Millard go from here?