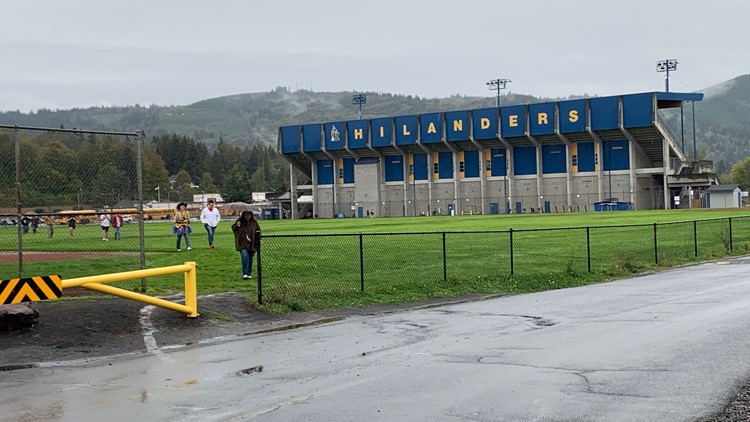 District officials said that police were systematically searching and securing each room at the school before releasing students to a safe location.

KELSO, Wash. — Police evacuated Kelso High School in Cowlitz County Friday afternoon due to reports of a gun on campus, according to Kelso School District officials. There was no active threat to students and no reported injuries, they said.

Officers from the Kelso Police Department, Longview Police and deputies from the Cowlitz County Sheriff’s Office all responded around 1 p.m. after Kelso High School learned of the gun threat. Officers said the possible threat was initiated by a text message and an image of a firearm possibly inside the school.

“Kelso High School is in secure and teach due to a reported possible threat. Kelso Police are currently onsite investigating,” a district spokesperson said in an initial message to families. “At this time, students are all safe inside classrooms. The assembly and all other activities are canceled.

Police officers were searching and securing each classroom at the high school. As classrooms were cleared, students were being escorted to the school gymnasium after it was cleared. High school students were being held at the gym until the entire school was secured, which officials said could take a few hours.

The district asked that no one visit or try to enter the school as police worked to evacuate students. Instead, parents were instructed to park at Tam O’Shanter Park then walk to the South Gym in order to pick up students, bringing identification to display.

Middle and elementary school buses were expected to run as normal, the district said, but buses for high school students would not arrive at the school until about 4 p.m. in order to bring kids home.

“Student release time will be determined by police and the status of their investigation. Buses will return to Kelso High after the elementary bus runs to transport high school students,” the district continued.

All weekend activities — including the Homecoming football game, youth sports, and practices — were canceled, out of an abundance of caution. The district said they would reschedule the Homecoming dance, with the new date – yet to be determined – coming soon.

Kelso police said in a later update that there was no report of shots fired, no credible information that a student had a gun and no reported injuries.

The police response stemmed from a text message with an image of a firearm, possibly inside of Kelso High School, the agency said. Police cleared the scene and said that there was no reason to believe any further threat existed. KPD confirmed that no gun was ever found. Investigators interviewed “sources of the threat,” but no arrests are expected.