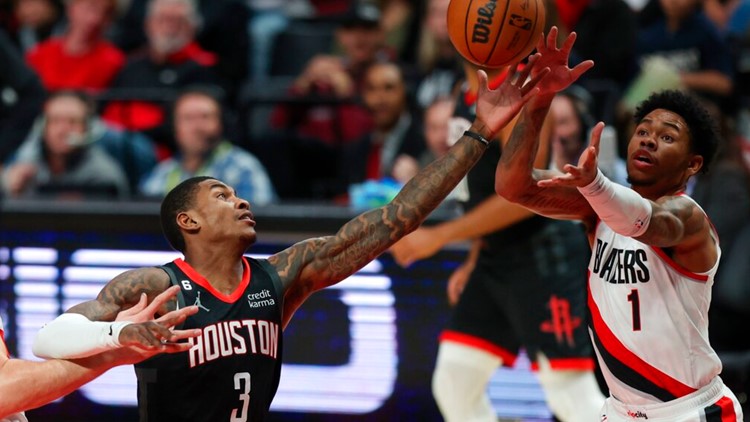 Anfernee Simons led all scorers with 30 points, including seven 3-pointers, for the Blazers. With the win, Portland improved to 5-1 this season.

PORTLAND, Ore. — Jusuf Nurkic had 27 points and 15 rebounds, and the Portland Trail Blazers beat the Houston Rockets 125-111 on Friday night despite the absence of star guard Damian Lillard.

Anfernee Simons led all scorers with 30 points, including seven 3-pointers, for the Blazers, who led by as many as 18 points. With the win, Portland improved to 5-1 this season.

Eric Gordon scored 18 points and Kevin Porter Jr. had 16 points for the struggling Rockets, who have just one win.

Lillard, Portland’s six-time All-Star, strained his right calf on Wednesday night against the Miami Heat. The team said he will re-evaluated in one to two weeks.

RELATED: Blazers’ Damian Lillard has calf strain, will be re-evaluated in 1-2 weeks

Lillard came up limping with some five minutes to go in the third quarter and headed for the locker room. He did not return and the Blazers lost, 119-98. Afterward, Lillard said he was hopeful that treatment would allow him to return for Wednesday night’s game against the Memphis Grizzlies.

Rookie Shaedon Sharpe made his first start for the Blazers, and Simons moved to point guard in Lillard’s absence. Sharpe finished with 14 points.

Alperen Sengun, who missed the last two games because of illness, made his first start of the season for the Rockets. Porter, who has been dealing with a right quad contusion, also started.

Portland jumped out to to a 29-16 lead in the opening quarter after Drew Eubanks’ dunk.

Sharpe had back-to-back dunks in the second to give Portland a 45-34 lead and the Blazers went on to lead 69-58 at the break.

The Rockets closed to 74-69 on Sengun’s basket, but it was as close as they could get in the third quarter and Portland led 96-82 going into the final period.

Nurkic made had his first 3-pointer of the season to put Portland up 107-93. The Rockets narrowed the gap to 112-104 with just over five minutes to go in the game.

Rockets: Rookie TyTy Washington Jr. missed a sixth game with a left knee sprain. … It was the second of a four-game road trip for the Rockets, who are on a stretch where they play eight of nine away from home. … Jae-Sean Tate fouled out with 3:57 left in the game.

Trail Blazers: Portland split the series with the Rockets last season 2-2. … Simons had seven 3-pointers in the first half.

Rockets: At Phoenix on Sunday.