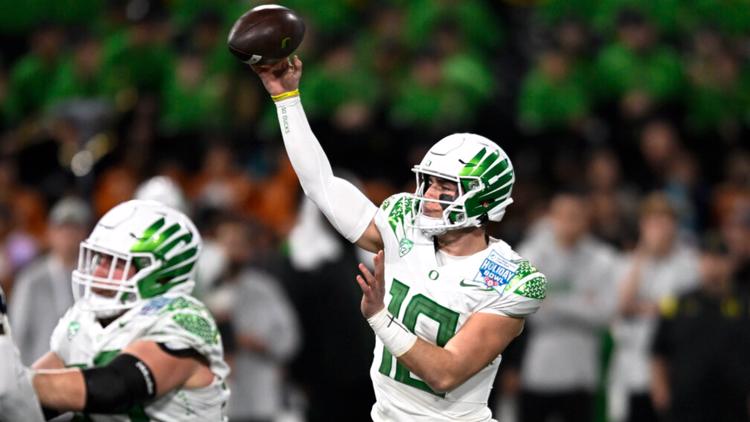 The thrilling win was a nice finish for the Ducks, whose once-promising season fizzled out in November when they lost two of three after winning eight straight.

SAN DIEGO — Bo Nix threw a 6-yard touchdown pass to Chase Cota on fourth down with 19 seconds left and Camden Lewis’ PAT bounced off the left upright and went through to give No. 15 Oregon a wild 28-27 victory against North Carolina in the Holiday Bowl on Wednesday night at Petco Park.

Cota caught the ball at about the 1 and got it across the goal line as he was being tackled by Don Chapman. The play was upheld on review. Lewis then banked in the PAT.

North Carolina (9-5) got the ball to the Oregon 42 with one second left before Drake Maye’s desperation heave into the end zone fell incomplete.

The Ducks finished 10-3 thanks to Nix, who came up big late in the fourth quarter after being held in check much of the second half. He threw a 6-yard TD pass to Troy Franklin with 6:58 to go to pull the Ducks to 24-21.

Nix then moved the Ducks 79 yards in eight plays for the win, with the drive being aided by a pass interference call.

The Tar Heels took a 21-14 lead on Maye’s 49-yard TD pass to Kobe Paysour just before halftime that was set up by an incredible interception by linebacker Power Echols. Echols’ jaw-dropping interception and 40-yard return gave the Tar Heels the ball at the Oregon 49.

With the score tied at 14 and Oregon driving late in the second quarter, Nix threw behind Terrance Ferguson and the ball bounced off the right calf of linebacker Cedric Gray toward Echols, who tipped it up with his right foot before bending over and grabbing it and taking off to the Oregon 49.

Maye then hit Paysour at about the 28 and he outraced the defense into the end zone, where he bowed to the crowd after giving the Tar Heels a 21-14 lead 26 seconds before halftime.

Oregon’s Bucky Irving had touchdown runs of 2 and 66 yards — the third-longest in Holiday Bowl history — in the first half.

Oregon: The thrilling win was a nice finish for the Ducks, whose once-promising season fizzled out in November when they lost two of three after winning eight straight.

North Carolina: The Tar Heels ended with four straight losses, including a 29-point defeat against Clemson in the ACC title game.

Oregon: Nix announced last week that he’ll return for his fifth season of eligibility. “There’s nothing like being an Oregon Duck. For 2023, I’m back,” he said in a video.

North Carolina: Maye recently batted down rumors that he had been offered a $5 million name, image and likeness deal to transfer. Maye had a breakout season that has made him a top prospect for the 2024 NFL draft.