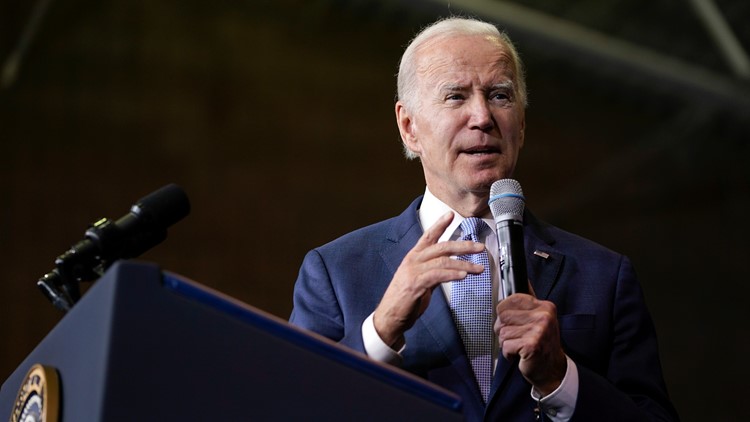 President Biden took the podium at around 12:30 p.m. He talked about lowering costs for American families, primarily seniors.

He championed his Inflation Reduction Act, which goes into effect in January. It will lower health care premiums for millions of Americans, drop prescription drug prices and cap out-of-pocket expenses for prescription drugs at $2,000 per year.

“This year alone drug companies raised the price of more than 1,200 drugs higher than the rate of inflation,” said the president. “Today marks the beginning of Medicaid’s open enrollment period so when seniors pick plans for next year, they’ll be able to take advantage of the progress we’ve made that’s not all for years the fee you pay for Medicare to cover your visits to doctors’ offices have gone up now for the first time in more than a decade they’re going to go down… they’re going to go down.”

His Inflation Reduction Act will also cap out-of-pocket costs for things like insulin to just $35.

“We’re going to keep fighting for lowering costs of insulin for children and families as well because of the Inflation Reduction Act seniors are also going to get their recommended vaccines without any co pays,” said the president.

It’s a change that would help many of the families sitting in the audience.

“A lot of my aunts are senior citizens, and they have to pay for medications out of their pocket and so it’ll be a great help,” said Twauna Hennessee.

“I have a sister who’s on social security disability and so she gets her health coverage through Medicare, and I think it’s going to make a significant difference from her,” added Claire Syrett who drove from Eugene to watch the president speak.

The president also targeted the republicans in congress.

This concerns some Oregonians like Syrett. “For the republicans to be so cold hearted as to not recognize the real impacts this has on people and their daily lives that is very disturbing and I hope we don’t see that happen,” she said.

Biden also took the opportunity to highlight his view of the working class.

He left many with a renewed sense of hope.

“It’s easy to lose hope right now things are scary and so I really appreciate that he had that to say to us,” added Syrett.

“We just have to remember who in God’s name we are… this is the United States of America and I’ve never been more optimistic in my life,” said the president.

The next stop for Biden is Delaware where he will stay through the rest of the weekend.