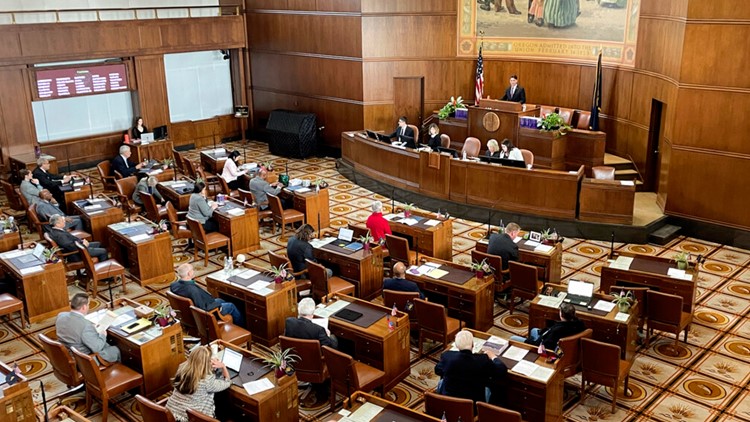 From now until roughly the end of June, lawmakers will be working on legislation that they say will help address issues of housing and homelessness, among others.

SALEM, Ore. — The Oregon legislature kicked off its 2023 legislative session on Tuesday, one marked by new leadership and a busy agenda. Over the next five months, there will be hundreds of bills introduced, some of which will become new laws. Hundreds of millions of dollars will be directed to state agencies and initiatives across Oregon.

The proceedings can be fascinating, they can be tense, and often they can be downright boring — at least for the outside observer. Regardless, the legislative session can have a big potential impact on the lives of ordinary Oregonians.

Tuesday was the first legislative opening day since the COVID-19 pandemic began where lobbyists and members of the public were allowed in the capitol. The change of pace brought with it a low thrum of excitement.

The first day of the session is also customarily when the House and Senate will set their expectations and lay out their agendas. At noon, a KGW crew gathered in a small Senate conference room where Democratic leaders shared their legislative priorities; highlighting affordable housing, homelessness and issues of law and order.

Sen. James Manning has been working on a plan for universal health care and will again push for that this session.

Sen. Floyd Prozanski, chair of the public safety and justice committee, said lawmakers will work to make the gun restrictions in Measure 114 something that is easy to implement and can avoid getting tied up in court.

Prozanski also said lawmakers will try to adjust Measure 110, which decriminalized user amounts of all drugs. He wants to lower the limit for the amount of fentanyl a person can have before it’s considered more than just a “user amount.” Basically, if you’ve got more than a certain number of pills, Measure 110 wouldn’t protect you from criminal charges.

“We will be looking at what is the break point as something being personal use quantity as to what isn’t,” he said. “As we know, fentanyl has unfortunately shown its ugliness, the strength and potency of it, and so you will probably see something that seems to be smaller in size in personal use than you would for someone else, because of the ramifications.”

Opening day did not run perfectly. As Senate Democrats were beginning their meeting, something unexpected happened — almost immediately, the recording for their digital stream abruptly stopped as Senate President Rob Wagner began his remarks. A minor glitch, quickly fixed, but it resulted in peals of rueful laughter.

It was also clear that the Democrats, who once again control the Oregon Senate, had been reminded to say that they looked forward to working with their Republican colleagues — something multiple lawmakers hit on. But, as one reporter pointed out, Republicans weren’t invited to be part of the presentation.

“I think you’re going to see a very clear tone that good ideas come from everyone,” Wagner replied. “And all of our committee chairs have already started the process of reaching out to their vice chairs, every member of their committee and trying to identify areas — whether it’s the issues you see reflected here at this table — so many of these issues are representative across the state of Oregon and I think there’s a ton of areas of alignment.”

Meanwhile, on the Oregon House side of the capitol, Democratic Speaker Dan Rayfield held a news conference with Republican Leader Vikki Breese-Iverson that sounded more promising in terms of collaboration.

Insights of a legislative insider

On Monday, The Story ran an interview with Oregon’s now-former Senate President Peter Courtney. He’s the longest-serving lawmaker in state history, and he decided last year, at 79 years old, not to run for re-election. As of Tuesday, Courtney was truly out of the game — at home raking leaves and still trying to figure out what he’s going to do next, or so he told KGW’s Pat Dooris.

A number of viewers enjoyed Dooris’ conversation with Courtney and sent appreciative comments. One such viewer called to leave a detailed message, adding some context to Courtney’s recollections of the good old days, when lawmakers would gather at night after a long day of feuding and have some drinks to relax together.

That viewer’s name was Frankie Bell, and here’s what she had to say:

“I loved the piece on Peter Courtney, (but) it has so much more depth than you were able to cover. I’ve worked in the capitol since the late 60s — still working. going to work this legislature as a House receptionist. Partly because I’m addicted. But the other part is that the story on Courtney was so wonderful.

“I just wish that you could have taken it a little bit farther in that, the camaraderie that he was talking about is why we got such good legislation. I have no statistics particularly but at least legislators were having happy hour together and talking to each other. And now they’re too busy, they don’t seem to be able to do that, the ethics laws work against it. At any rate, it’s a good story and Peter Courtney saw it all.”

Frankie Bell wasn’t just blowing smoke about being a capitol insider, as it turns out. A former lawmaker told Dooris that Bell is a legend in the capitol. And sure enough, when Dooris and a KGW crew visited the capitol on Tuesday, Bell was there on the second floor of the Oregon House.

Bell is 85 years old, and she has indeed worked in the legislature since 1967, during the final years of Governor Tom McCall. Over the last 57 years, Bell has seen a lot of what happens behind the scenes — and she’s earned a great deal of wisdom when it comes to what works and what doesn’t.

“The mechanism for getting together in the old days was — the good old days — was they socialized after work,” Bell told KGW. “They don’t do that anymore because of the ethics laws. They’re afraid of … I guess corruption. I don’t know what they’re afraid of. That is a definite lack. And I’ve seen the whole process change over the years because of that. They need to talk to each other in an informal setting — whether it’s at a dinner or party, it really helps.”

Bell witnessed a fundamental truth about people: It’s harder to demonize someone you know, someone who has the same hobby as you, who likes the same sort of music or food, someone who laughed at your joke over a game of cards the night before.

“In the 70s when we passed all that landmark legislation … the Bottle Bill, the Beach Bill, urban growth, all of that — land use planning, which is what you’re talking about,” Bell said. “And that was with a Republican majority. Republican House, Republican Governor Tom McCall. The Senate was a coalition, a conservative coalition — Democrats were in the majority — but we passed all that landmark legislation and I think it was because everybody got together after work and actually talked to each other.”

From Bell’s perspective, it’s been a while since the two political parties got together to pass such generation-defining laws and plans for Oregon. And perhaps some part of it is the fact that lawmakers aren’t regularly brought together outside of work like they once were.

“There’s not a setting in which they get together regularly. They go to caucus, their own caucus, they get that point of view, then they don’t get to talk to each other in any other setting. Perhaps on the floor of the House. As they’re just now starting to go,” Bell said, chuckling.

There was some sort of legislative mixer or party going on Tuesday night in Salem, but Bell said that it was the only one of the year.

About the 2023 legislative session

For Oregonians who want to testify on a bill, talk to lawmakers or just see the session in action, the capitol building in Salem is open to the public starting at 8 a.m. each weekday. That said, street parking is the only option for capitol visitors, so it pays to get there early.

This session also marks a more recent addition — stronger security checkpoints. Visitors will need to go through a metal detector and a bag check. Guns are not allowed inside the building.

COVID-19 restrictions have gone away and masks are no longer required in the building, but there are construction-related restrictions to know about. Part of the capitol building is getting seismic retrofits to ensure it can withstand an earthquake. In these areas of the building, public tours aren’t going on and the area is closed off to the public.

Dooris noted seeing a lot of people around wearing bright construction vests, and the halls of government often rang with the sound of jackhammers and other power tools.

Hearing rooms are open to the public, in addition to the galleries where people can watch floor sessions in progress. Anyone who can’t make it to Salem can still sign up to testify virtually — committee hearings and floor sessions will be streamed live and video will be posted on the legislature’s website.