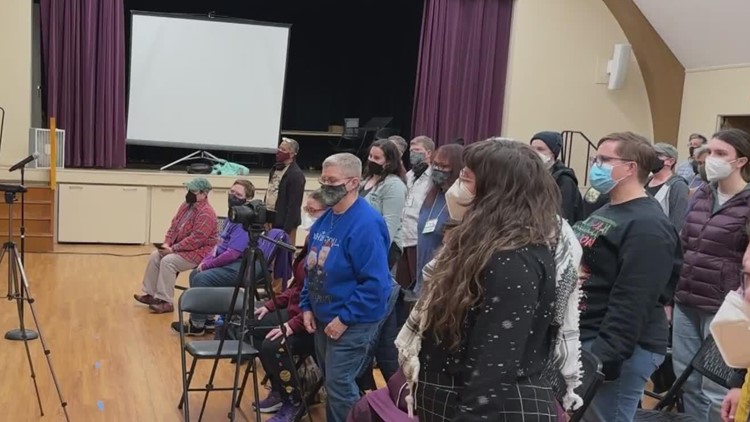 The two inclusive choirs are preparing for two separate shows in December to celebrate visibility and community through song.

PORTLAND, Ore. — The sounds of the season have returned, and local choirs are lifting their voices in song.

Two inclusive choirs in Portland are preparing for two separate shows in December to celebrate visibility and community.

The Portland Lesbian Choir presents Be A Light on Saturday, Dec. 3, and Sunday, Dec. 4 at the Performing Arts Center at Park Rose High School in Northeast Portland.

“The show is ultimately about finding a place where you belong, where you feel joy and love,” said Braeden Ayers the artistic director of PGMC. “We’ve got everything, we’ve got some traditional holiday carols with classical orchestration, which is really fun to sing. Some gospel in there as well and then we have a lot of great hits by some gay icons.”

“There will be amazing dancers, great choreography, stellar music, and some really exciting moments,” said Richard Young the executive director of PGMC.

Performance groups like these are not only a place to sing and dance but a safe space to find community.

Ayers was previously the artistic director for the Colorado Springs Gay Men’s Chorus. He said the recent mass shooting at Club Q is an all too familiar reminder of just how important these types of spaces are for LGBTQ people.

“What I learned there as well as here is that visibility and signing is one of the many ways that we can advocate for ourselves, but for a better society at large,” Ayers said.

“Unfortunately, it’s not an anecdote to this horrific violence, but it’s it feels like what we can do To continue to be a voice and a presence and a place where people who identify as queer could come and have a safe space to be and create community through music,” said Mary McCarty the artistic director of PLC.

The Portland lesbian chorus will let their voices shine in the Be The Light concert. It will feature a variety of genres and styles.

“We’re performing music, all about light and being a light in the world, sort of persevering,” McCarty said.

The group has had to do just that as a choir: persevere. Be a Light isn’t necessarily a holiday show but will bring an uplifting message for the season.

The group was slated to do this show in January 2022, but a few weeks before the show COVID concerns forced them to cancel.

“I guess it’s a testament to the community force to continue to sing,” McCarty said. “It’s not something we have to do. It’s not an eating, drinking, having a roof over your head kind of activity, but it fuels people so much.”

“Music has a way of touching the heart and I think that at this time of year when there are so many things in the world going on and there’s so much pandemonium — music is kind of the touch point that reminds us of who we are as a community and as people,” Young said.