'It's craziness' | Holiday travelers stuck in Portland due to flight cancelations, delays at PDX 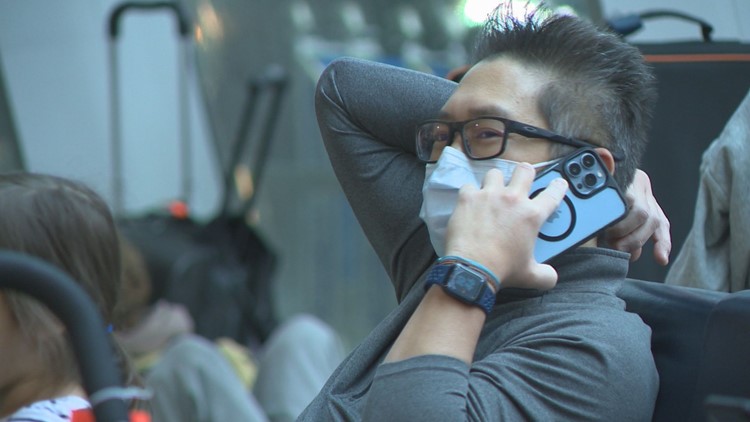 PORTLAND, Ore. — After days of frustrations, delays and rescheduled flights, travelers at Portland International Airport experienced many of the same issues on Christmas Eve.

Although wintry weather was on the way out, airlines canceled or moved dozens of flights — some until after Christmas Day.

Among the airlines was Alaska Airlines, who announced Saturday morning that all mainline flights out of PDX had been canceled through Saturday midnight due to freezing rain conditions in Portland.

“It’s craziness,” said Maria Brown, hoping to get home to Southern California. “It’s kind of like those Hallmark movies where you cannot get home for Christmas —  this is exactly it.”

Brown was in town visiting her daughter in Falls City.

“I went to fly out early because I heard the storm was coming in. As I was leaving, Southwest decided to cancel my plane on Friday. I got onto American Airlines and we sat on the runway for about a half and hour, and the pilot said… it’s never been this bad, I will not fly out of here.”

“We all jumped off, and we had to get in line again. Now, we can’t fly out until Monday, the day after Christmas so we’re stuck here at the airport,” Brown said.

Travelers spent hours in line — not to go through security — but to rebook their canceled flights. Mike Casner from McMinnville had three flights canceled since arriving to Portland on Thursday. He finally secured a rebooking for Christmas morning.

Sean and Jordan Capers attempted to rebook a new same-day flight to Seattle.

“This is our first time,” said Sean, “The crazy rebooking starts now.”

All these delays and cancelations could be quite upsetting on Christmas Eve, but many navigated the chaos by taking it in stride.

“I think that is what you have to do with holiday travel,” said Jordan, “But I will say trains may be a good option.”

“We are one part of the many things happening here buy today is a happy day for us,” said Kris Esau, who lives in Vancouver.

She met Kyra Gibbons and Patrice Johnson while waiting in line for Southwest Airlines two days ago. Once their flights got canceled, they started talking, and decided they needed to go to a hotel.

“We are too old to sleep on the floor!” joked Gibbons.

The once-told strangers said they’re now lifelong friends, after sharing an Airbnb for a couple of days. They told KGW they’re planning for a reunion at the coast in the future.

A spokesperson for PDX explained that crews continued to deice the runways and airfield as the conditions outside warm up. They’re encouraging everyone to check with their airlines, and arrive at least two hours before the flight takes off.