'It's a life-or-death issue:' Providence nurses still calling for change after 2+ years 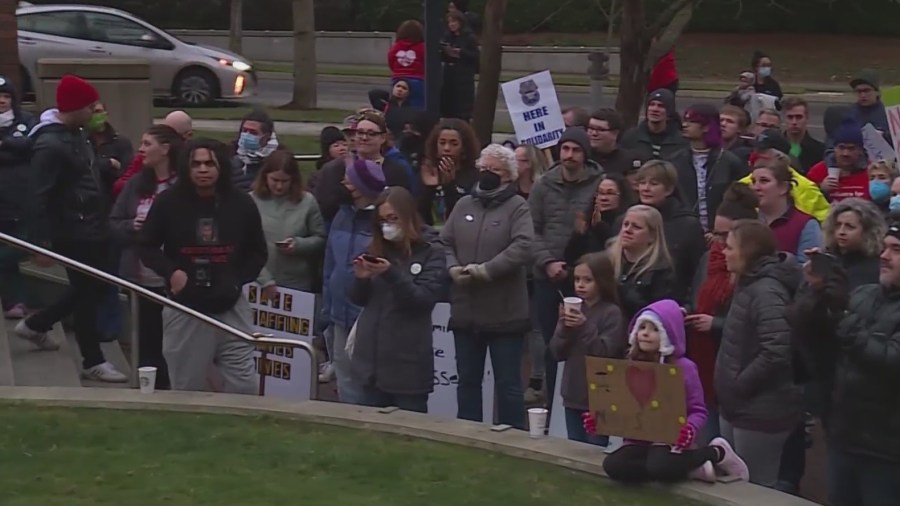 Healthcare workers say nurses at several Providence locations have been working without a contract.

PORTLAND, Ore. (KOIN) — Frontline healthcare workers with Providence lined outside headquarters Friday to continue their fight for safer staffing and a fair contract.

It’s been an ongoing issue since before the pandemic began, but more than two years later, nurses say the crisis isn’t getting any better, as they fight for fair contracts, better wages and safe staffing.

Nurses told KOIN 6 News they are tired of talking about this, but say it’s a cycle they can’t break, despite getting to the breaking point.

In the latest chapter of this saga, healthcare workers rallied outside Providence headquarters in Portland Friday after they say nurses at several locations have been working without a contract as they continue to negotiate with executives since last fall.

“I’ve been fighting for this for a long time, and it’s disheartening to see that hospitals continue to make excuses about why they can’t pay us enough, why they can’t hire enough, or why they can’t create conditions that make it attractive to be a nurse,” said Virjina Smith a nurse at Providence Willamette Falls.

Providence tells KOIN 6 their employees receive up to 25 weeks of paid time away, more than double the state plan, and claim their patient safety standards are among the most rigorous in health care, stating in part: “We take staffing extremely seriously and are working hard to attract new nurses and retain our current, valued caregivers … We’re proud of the fact that our short-term disability plan is market competitive and paid leave benefits in our Oregon ministries are among the highest in the state.”

However, Smith says, at this point, she feels like a broken record asking Providence to address the ongoing staffing crisis and contract concerns.

“It is attractive to be a nurse, you need to take care of people. I don’t feel like I can do that when I have too many patients to take care of but not enough people to help me,” she said.

Smith also says there’s new legislation that may hold hospitals accountable. If passed, House Bill 2697 would establish minimum staffing standards and create enforcement tools, like penalties and fines for hospitals that fail to meet those requirements. It would also give nurses the ability to sue if there is a pattern of short staffing.

“Safe staffing saves lives. Fundamentally, that’s really what it’s about. We know that patient mortality is tied to the amount of patients that a nurse has. We also know that nurses are telling us that the reason they’re leaving the workforce is because of staffing,” said State Rep. Travis Nelson, who is also a nurse.

Nelson is co-sponsoring the bill and says that he hopes it will break the vicious cycle he’s seen firsthand.

Providence tells KOIN 6 News that across Oregon, their goal is to come to agreements with their unions to ensure market-competitive wages and benefits that will both attract and keep nurses.

But hospital representatives and the Oregon Nurses Association confirmed Providence is not in favor of the new bill which would enforce staffing minimums.