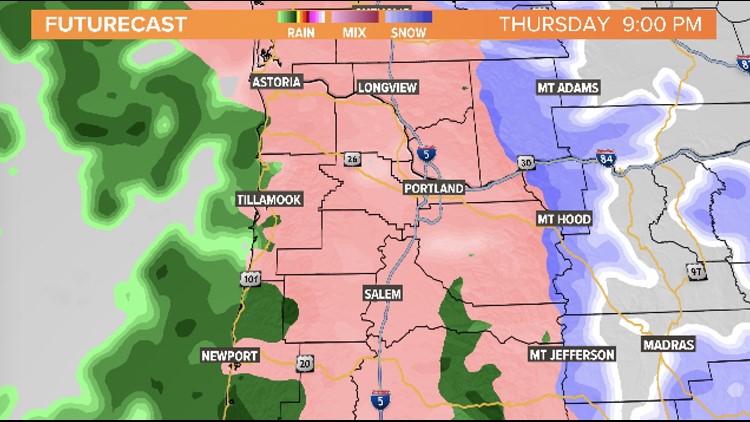 Moisture from the west and cold winds from the east are expected to converge over Portland starting Thursday, creating prime conditions for freezing rain.

PORTLAND, Ore. — The forecast is increasingly certain: Portland is headed for an ice storm. In fact, much of the Willamette Valley and Southwest Washington are in for a sustained barrage of sleet and freezing rain starting as early as Thursday afternoon, with icy conditions persisting as late as Saturday morning.

Sleet and freezing rain are the kinds of precipitation that create sheets of ice over every surface, with the potential to bring down tree limbs and paralyze streets and highways. Arriving in the final three days before Christmas, it’s a recipe for nightmarish holiday travel conditions.

Preparing for a storm: What should be in your winter emergency kit

The icy weather already arrived earlier in this week in the Columbia River Gorge; eastbound Interstate 84 was closed for several hours Tuesday between Rooster Rock State Park and Hood River after a fatal crash involving an SUV and a semi-truck.

Here’s the timeline for what to expect over the next few days, as of the latest forecast on Thursday morning. This story will be updated as our weather team tracks this storm and updates to the forecast become available:

The air in Portland got rapidly colder Wednesday afternoon as east winds picked up, and the city woke up to frigid temperatures Thursday morning, made worse by the wind chill.

Much of the United States is getting walloped by a large Arctic air mass that’s descending southward this week. It won’t extend all the way to the west coast, but the edge of it will push into eastern Washington and Oregon on Thursday.

The ongoing east winds are funneling that cold air through the Gorge to the Portland area, dropping temperatures to the mid-to-low 20s on Thursday and setting the stage for the ice storm.

The best advice for Portland and Salem residents is to get home by noon Thursday, while things are still dry.

Light precipitation will slowly develop in western Oregon Thursday afternoon and a warmer air mass from the Pacific will move in aloft. That’s the final piece of the puzzle to kick off the ice storm.

With gusty east winds still blowing and ground temperatures in the low to mid 20s, rain falling from the warm air mass will freeze into sleet on the way down or freeze as soon as it hits the ground, becoming freezing rain.

The National Weather Service has issued a Winter Storm Watch for the Portland area from Thursday afternoon until Friday afternoon.

A significant accumulation of freezing rain and sleet is expected along the I-5 corridor in the afternoon. The initial wave of moisture may evaporate, but more will arrive, and it does not take much ice to make road travel difficult.

The moisture won’t let up as it gets dark; the forecast for 9 p.m. Thursday evening shows steady and widespread sleet or freezing rain throughout Portland, the Willamette Valley and Southwest Washington.

Ice is also expected in the Gorge, with snow out further east near Hood River. Some parts of the coast will be warm enough to still get rain, but others will be hit with the same freezing rain as the valley.

The heaviest precipitation is expected to fall Thursday night through Friday night, and it’s going to be nearly all ice. The actual snow level will be at 4,000 feet, so only higher elevations in the Cascades are likely to see snow rather than freezing rain.

The east winds are likely to die down on Friday, according to KGW chief meteorologist Matt Zaffino, but without another weather system immediately arriving to push out the cold air, Portland could see icy conditions persist through Saturday morning.

Some other parts of the Willamette Valley may start to warm up on Friday, with the ice changing to rain.

Temperatures will warm up starting on Saturday, particularly in the afternoon as a weather front arrives and pushes out the coldest air, although the Gorge will stay icy at least into Saturday night. The warming trend will continue on Sunday, including in the Gorge.