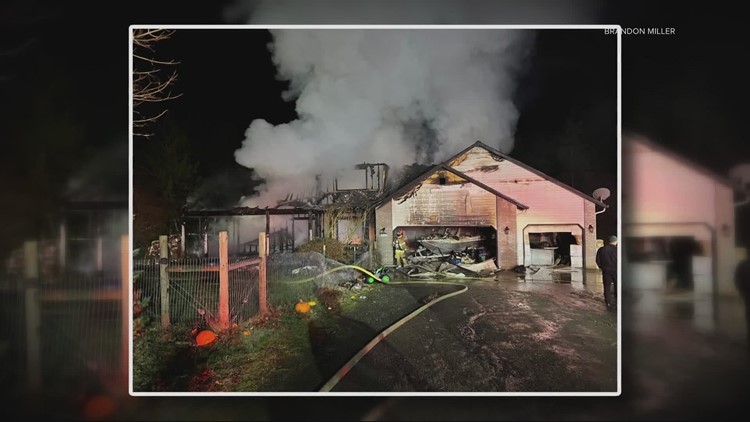 A La Center, Wash. home was fully engulfed in flames when firefighters, including the homeowner, arrived on scene on Monday.

LA CENTER, Wash. — A Clark County family is grieving the loss of their four pets, their home and all of their belongings. They were lost in a house fire Monday night. No one was injured.

“It’s pretty surreal to be one of the responders that responds on your own emergency at your own home and be completely helpless,” said Miller, who’s also a paramedic with North County Emergency Medical Services.

As Miller has done on so many emergency calls, he set aside his emotions to focus on the task at hand, in this case making sure his family was safe.

Thankfully Miller’s wife Jax Ramsey, a critical care nurse, was at work. Their four children ages 4 to 18 and their 22-year-old “bonus son” were with family and friends. Everything inside the house was destroyed — including their pets.

“The heartbreaking part was just knowing that our two dogs and our two cats were in there and what they probably went through before they passed,” said Miller.

It’s the kind of heartache Miller has seen so many other fire victims experience; emotions he’s had to compartmentalize, now laid bare.

“I will never look at fire the same way ever again,” said Miller. “This has brought a whole new meaning to looking at the bigger picture in the future for what I do.”

Investigators are looking into what caused the fire but at this point don’t believe it was suspicious.

Loved ones started a GoFundMe account to help Miller and his family get back on their feet. Before insurance kicks in, Miller hopes to buy clothes and other day-to-day items that no one thinks they’ll lose overnight. There’s also Christmas to think about, especially for the little kids.

“We told them this morning that the house is gone and the animals were lost and all the Christmas presents were destroyed,” said Miller. “They took it far better than I expected.”

Miller and Ramsey are grateful for the love and generosity so many have already shown them and the family members they’re staying with.

“The main thing is our family is safe and we’re all together,” said Miller. “Just take it day by day. It’s all we can do.”