'I have no magic, beautiful plan': Oregon's longest-serving lawmaker will miss the halls of government 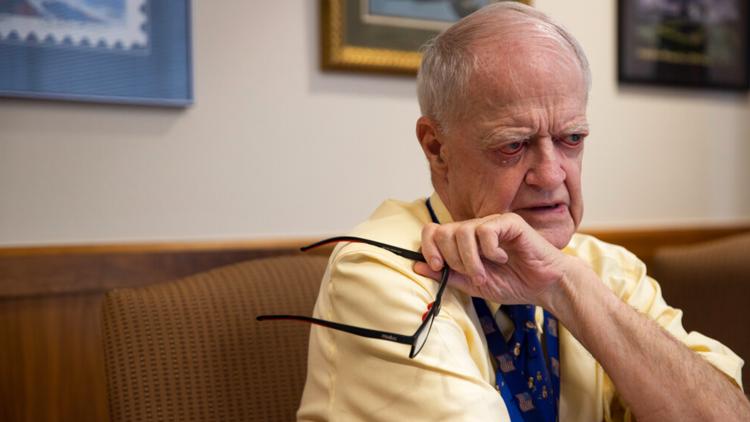 Courtney was first elected to the legislature in 1980. Last year he announced that he wouldn’t seek re-election — but he admits that he doesn’t know how to turn off.

SALEM, Ore. — On Tuesday, the Oregon legislature will kick off its opening day of 2023, the 82nd legislative session. This session marks a change in Salem’s political landscape the likes of which have not been seen in some time. Not only is there a new governor, but one longtime lawmaker will be absent — former Senate President Peter Courtney.

The 79-year-old announced around this time last year that he would not run for re-election in 2022. It’s quite a change of pace for the career lawmaker. He was first elected to the Salem City Council way back in 1974, then joined the Oregon legislature in 1980 as a Democrat representing parts of Marion and Polk counties.

Over the years, Courtney’s political fortunes waxed and waned, but he largely remained a state lawmaker. In 2003, he was elected Senate President, holding that post for the next 20 years.

During his tenure as a lawmaker, Courtney championed mental health services, pushed through several bills related to animal rights, set aside large pools of money for seismic upgrades on schools and other buildings and helped push through a corporate activity tax that significantly raised funding for K-12 schools.

Courtney’s leadership lasted through some challenging times in the legislature: the COVID-19 pandemic, a sexual harassment scandal within Senate ranks and the strife that accompanied several Republican walkouts, to name a few. He was the longest-serving lawmaker in Oregon history.

Last year, when Courtney announced his coming retirement, KGW’s Pat Dooris talked with him about the decision. This week marks the first time that the interview has been aired.

“What’s next for you?” Dooris asked Courtney. “I don’t envision you sitting on a rocking chair on the front porch.”

The lawmaker’s reply was characteristically honest and curmudgeonly.

“Now that really got me. I’m just gonna watch the river come up. I live on a river, Willamette River — jeeze it’s coming up,” Courtney began. “I don’t know. I don’t have — I don’t play golf, I don’t have a perfect hobby … that’s another question that you’re asking me. And again, I was sad before I started this interview and now I’m outright depressed thanks to you, Pat Dooris.”

“Perhaps you could get an RV and travel the country with your wife,” Dooris offered.

Time flies when you’re having fun

Dooris first met Courtney back in 1990. Oregonians had just passed Measure 5, giving property owners a break on taxes but slashing state budgets. Barbara Roberts, a Democrat, was governor at the time. Courtney was still in the Oregon House then and was not willing to make cuts to education.

“I don’t want to smash mouth Barbara, but it’s time for legislators to be standing up saying, ‘Wait a minute … wait wait wait a minute,'” Courtney said, captured in archival footage from the time.

Courtney always had a way with words — speaking in blunt, folksy terms — and he was passionate on a number of issues. But when it comes to leaving the legislature, it’s hard for his sentiments to be captured in a soundbite. Anyone who has been around long enough to look back and feel how the time has slipped away can likely relate.

“We all say those things but you know … I still just don’t believe I’m at the age I am or where I am at in terms of Salem City Council,” Courtney said, reflecting on his first gig in politics. “I still don’t believe it. And I don’t understand how that all happened without somebody telling me ahead of time; the angels, my angels, ‘Now Peter listen, you gotta understand its goin’ by. Oh yeah. Peter you gotta understand you’re not gonna be able to do a lot of the things you used to do.’ And nobody tipped me off, so I’m really messed up about it.”

Courtney also reflected on how the atmosphere of politics has changed. While it’s always been rough and tumble, the former Senate President said that people used to make up at the end of the day.

“Oh I hesitate to give you an example,” Courtney began. “I was on the fourth floor of the House all my career, with the exception of when I became the caucus leader and went to second. But on the fourth floor there were two corner offices overlooking the western part of the grounds. And one of ’em was Representative Bill Markham and the other one was Representative Lonnie Roberts. And we all knew, at the end of the day at 5 o’clock on the sharp, it was party time up there. I shouldn’t tell the folks this, I mean it was happy hour. We didn’t go out of the building, it was happy hour!

“Now, Bill Markham was a very, god rest his soul, very conservative Republican. Lonnie Roberts actually was a very conservative Democrat. But they came from different worlds. And you could go in there, I’m afraid to tell ya — liquor and there was … you know and it was just raucous. And we had just had a terrible fight in the morning on the House floor on some bill, goin’ at it. And here we are — and actually we’d go down and get people, ‘Come on, get in here.’ And you didn’t even need to … and just, you’d have two individuals who were really going at it just a few hours before. I mean going at it on the floor or in committee.

It’s not easy to leave something behind that you’ve enjoyed and count yourself good at. Near the end of Dorris’ chat with Courtney, he turned the tables — asking the newsman when he intends to pursue his own retirement.

“I think, like you, I still love it — every single day,” said Dooris. “It’s interesting, it’s intellectually challenging, it’s rewarding. I like doin’ it.”

“So you’re not ready to call it quits?” Courtney asked.

“So you may never retire either,” Courtney mused. “If you had your way, you will never retire.”

“Yeah. I think that’s right,” Dooris replied. “I want to tell stories that impact people, forever. I may not do it five days a week on deadline … “

“I gotta change my mind today and say I am gonna — now you got me all messed up,” Courtney said, suddenly regretting his decision to leave the legislature. Dooris laughed. “You know what, Dooris!”

“Can you un-retire?” Dooris joked.

“No!” Courtney’s wife, Margie, interjected from somewhere in the house. They’ve been married since 1976.

“I heard that ‘no,'” Dooris remarked.

“That was the wife in the background,” Courtney said. “She just — I could do it if I could sneak away for awhile, but they’re tracking me. I — my three sons and wife — they’re tracking me. They put an invisible thing on my ankle and I can’t, they know where I am and everything. It was not nice. Boy, my sons. It was not nice. I have three sons. I thought one of them secretly would go with me. I tried it — I cant get one of my sons to go with me!”

Rob Wagner, a 50-year-old Democrat from Lake Oswego, is now Senate President. His first full day in office is on Tuesday, when the legislative session gets underway.