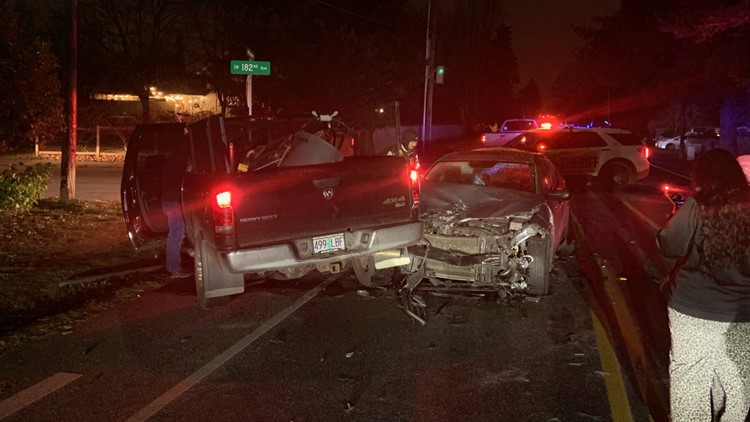 ODOT said that ice and high winds were making driving conditions unsafe through the area, and I-84 would remain closed from exits 17 to 64 until conditions improve.

PORTLAND, Ore. — The Oregon Department of Transportation shut down I-84 between Troutdale and Hood River on Thursday night, citing icy conditions through the Columbia River Gorge as the anticipated winter storm moved in.

The incoming ice storm was expected to make Portland-area roads very messy starting Thursday evening. The existing high winds and frigid temperatures were forecast to combine with incoming moisture to produce sleet and freezing rain, which can cause rapid ice accumulation.

The Gorge, however, quickly saw some of the most dramatic impacts of the storm. ODOT said that ice and high winds were making driving conditions unsafe through the area, and I-84 would remain closed from exits 17 to 64 until conditions improve.

The Historic Columbia River Highway east of Corbett was also closed with no access to Vista House at Crown Point, with ODOT citing dangerously high winds.

“U.S. 26 over Mount Hood and many other roads over the Cascades are not safe alternate routes between eastern and western Oregon during this wide-ranging storm,” the agency said. Many roads are icy, snowy, experiencing high winds and may see downed trees or power lines in the days to come.”

The agency advised drivers to stay off the roads altogether until warmer temperatures arrive.

Road closures around the area

ODOT also said that a crash north of Eugene had closed I-5 in both directions near the Van Duyn Road interchange. The closure caused long backups in either direction.

In Clark County, a crash on I-5 northbound shut down all lanes north of La Center due to multiple vehicle crashes, including multiple semis. A little after 9 p.m. a northbound lane reopened while semi trucks waited for towing, according to Clark-Cowlitz Fire Rescue.

A crash on Highway 101 between Neskowin and Lincoln City resulted in a closure impacting all lanes in both directions.

Roads throughout the Willamette Valley quickly became slick and icy as precipitation moved in Thursday evening, though KGW reporters in the field noted that few people seemed to be out on the roads.

The streets stayed relatively clear in the Portland metro area Thursday afternoon thanks to dry conditions, although the high winds did cause some incidents including a downed tree that closed a block of Northeast 22nd Avenue for a couple hours and another that broke three power poles and closed part of Southwest Walker Road.

“Freezing rain is just another ballgame,” said PBOT spokesman Dylan Rivera. “Freezing rain can take a street that we’ve plowed and make it all of a sudden icy and impassable.”

Drivers who absolutely have to go out are urged to be prepared with chains and emergency supplies. However, officials at both agencies stressed that the best approach is for drivers to stay off the roads altogether as the ice moves in.

“Even if people are chained up and even if people think they’re great drivers, ice will defeat you,” said ODOT spokesman Don Hamilton.

Officials at TriMet said the agency plans to run MAX trains overnight to keep lines clear of ice, and use ice cutters when needed. Buses will have chains, but riders should still expect disruptions and delays.

On Thursday evening, Portland police responded to a fatal crash near Northwest 22nd Avenue and West Burnside Street just a flew blocks from Providence Park. The agency said that a pedestrian was killed, and officers had closed down West Burnside between 20th Place and 23rd Ave until further notice.

It is too early to confirm if weather was a factor, according to police. But the accident did happen just as sleet was starting to fall ahead of the forecasted ice storm in the Portland area.

This is a developing story and will be updated as new information becomes available.