How much snow will Portland get this winter? Rod Hill winter outlook 2022-23 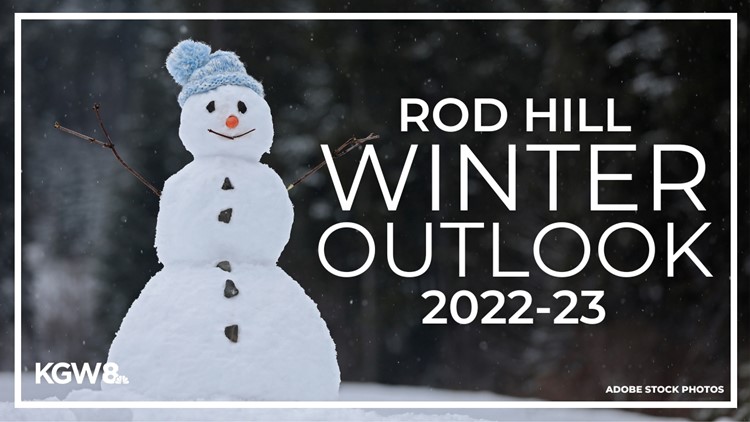 A third La Niña in a row means a rainy, mild November and December. After January, we can expect some snow, maybe 2 to 3 inches, but a large snowstorm is unlikely.

PORTLAND, Ore. — For only the third time since records have been kept, going all the way back to 1950, this winter will bring a third consecutive La Niña Enso cycle to Portland and surrounding areas.

The National Oceanic and Atmospheric Administration (NOAA) projects a moderate La Niña through December and then a weakening cycle into February with possible neutral conditions by winter’s end. This year’s winter outlook is based on the projection from NOAA that this winter will transition from La Niña to neutral over the season.

What does that mean for this winter’s weather? A third La Niña in a row means we can likely expect a mild, rainy November and December. In the new year, we can probably expect some valley snow, maybe 2 to 3 inches, but a large snowstorm in Portland is unlikely. Here’s a summary of what to expect this winter:

Will Portland see an Arctic blast?

Dating back to the winter of 2000-01, Portland has experienced 14 Arctic air invasions of which eight of those seasons were La Niña, four were neutral and two were El Niño. These findings show La Niña seasons are the most likely to experience an Arctic blast. The La Niña of February 2021 produced an historic ice storm across the Salem metro area and more than a foot of snow in Clark County.

My overall outlook is stated below. While the overall picture may be accurate, my methods haven’t always been able to pinpoint month-to-month outlooks for the winter season, but here’s what the data shows.

Will Portland get snow?

My valley snow seasonal predictions have shown good accuracy over the past 20 years. I found the following research to be surprising, but here it is: Dating back to 1980, only one snowstorm that dropped eight inches or more has come in a La Niña season and that was February of 2021. These findings below show that this winter, a large snowstorm is possible but not likely.

Here’s the valley snow outlook for this year:

As you can see below, La Niña winters heavily favor good snowpack years on Mt. Hood.

Based on a weakening La Niña the back half of the season, the Mt. Hood snowpack outlook calls for good snow numbers this season. There is some concern of a slow start to the season near 4,000 feet in regards to snow levels.

After all the data is shared, this coming winter will likely be similar to last winter. Chances of a big snowstorm and Arctic air seem low but are possible and if they happen, it would most likely be late in the season in February or March.

La Niña: What to expect

The graph below shows the blend of Enso cycle outlooks. Notice neutral to possibly weak El Niño conditions next spring.

Since 2000, strong and moderate La Niñas average two to three inches of total precipitation above normal for the months of November through March. This year’s winter outlook calls for a weakening La Niña to deliver near-normal precipitation, basically averaging between the moderate and weak categories seen below.

The outlook for November, December and January from NOAA shows little temperature confidence but also no strong signals of any cold weather across the western United States. Precipitation patterns are likely to be near to above normal for our local region.

The January flow is colder with an upper height of 549, placing the polar jet flow of 546 mbs across northern Washington and opening the door for a colder flow into February.

My report card from last winter is a little rough, but the only major error was predicting an Arctic blast in January that did not develop. While last winter season was not drier than 2020-2021, the precipitation total of 24.36 inches was near normal and in the range of typical La Niña seasons.