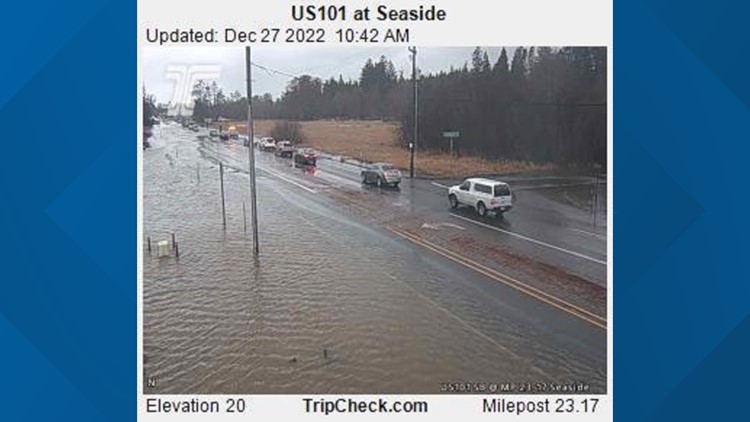 TILLAMOOK, Ore. — A heavy storm slammed into western Oregon Monday and Tuesday, bringing strong winds and high waves and causing flooding issues up and down the Oregon coast.

Pacific Power reported thousands of outages in coastal counties Tuesday morning, with the greatest concentration in Astoria, according to the utility’s outage map.

The Oregon State Police announced in a news release Tuesday afternoon that a person had been killed on Highway 26 when a tree fell into the roadway and struck a passing vehicle near mile post 16.

ODOT also tweeted that its Newport and Astoria offices would be closed Tuesday, the latter due to a widespread power outage, and that the Lincoln City office would close at noon for the day.

A landslide blocked part of Oregon Route 18 near Otis Monday evening, and an ODOT official said one lane was still closed as of about noon Tuesday, with flaggers directing traffic through the other lane.

The National Weather Service issued a High Surf Warning for both days, warning of breaker waves expected to reach 20 feet Monday afternoon and 25-35 feet Tuesday. The agency tweeted Tuesday afternoon that waves near the mouth of the Columbia River had jumped to 26 feet, and a buoy west of Newport reported a peak wave height of 30 feet just before noon.

Flooding during high tides would be possible along the immediate coast and in low-lying areas near bays, sloughs and coastal rivers, the NWS warned. The destructive waves can wash over beaches unexpectedly, creating a risk of people being swept off of rocks and jetties.

Strong winds were also expected at the coast Tuesday, with gusts of up to 75 miles per hour. Pacific Power to issue a news release Monday, warning customers in coastal counties of possible power outages. The utility said it was already staging personnel and equipment to respond as outages occur.

“The winds that are headed our way have the potential to cause damage to trees already weakened by the previous storm,” Vice President of Operations Allen Berreth said in a statement.